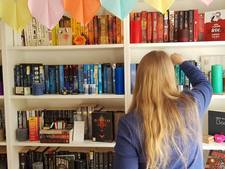 This will prevent Luci from sending you messages, friend request or from viewing your profile. They will not be notified. Comments on discussion boards from them will be hidden by default.
Sign in to Goodreads to learn more about Luci.

See all 5 books that Luci is reading…

“If reality is not what you want it to be, change it.”
― Hannu Rajaniemi, The Fractal Prince
tags: life-lessons
52 likes

“I'm seven hundred years old, Alexander. I know when something isn't going to work. You won't even admit I exist to your parents."
Alec stared at him. "I thought you were three hundred! You're seven huundred years old?"
"Well," Magnus amended, "eight hundred. But I dont look it. Anyway, you're missing the point. The point is-"
But Alec never found out what the point was because at that moment a dozen more Iblis demons flooded into the square. He felt his jaw drop. "Damn it."
Magnus followed his gaze. the demons were already fanning out into a half circle around them, their yellow eyes glowing. "Way to change the subject, Lightwood.”
― Cassandra Clare, City of Glass

Book Traveling Thursdays — 219 members — last activity Jan 05, 2018 03:28AM
Welcome to the group of bloggers who participate in Book Travel Thursdays. Check out all of the discussions under Must Reads for Participants.

Annemieke / A Dance with Books

Polls voted on by Luci