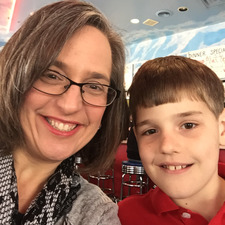 This will prevent Jennifer from sending you messages, friend request or from viewing your profile. They will not be notified. Comments on discussion boards from them will be hidden by default.
Sign in to Goodreads to learn more about Jennifer.

Jennifer is currently reading
An Invitation To Murder
by Norman Russell
bookshelves: currently-reading

See all 15 books that Jennifer is reading…

The Scent of Water by Elizabeth Goudge
1 note & 1 highlight
There are three necessary prayers and they have three words each. They are these, ‘Lord have mercy. Thee I adore. Into Thy hands.’ Not difficult to remember. If in times of distress you hold to these you will do well.”
Truth!
See Jennifer’s 3 books with notes and highlights…

“Be who God meant you to be and you will set the world on fire.”
― St. Catherine of Siena
tags: make-a-difference, self-actualization
502 likes

“But he did say that he believed the fair Lord of life had accepted a death so shameful by deliberate intent of love, so that nothing that can happen to the body should cause any man to feel himself separated from God. And he said further that fearful though the sight was, it was not what he saw that made him cast himself down upon the ground, with his face hidden in the grass, and weep. It was that the Lord of heaven, giving Himself into the hands of men, that is to say into his hands, to do with what he would, had by his hands been broken. This he said he had never sufficiently considered, and now, considering it, his heart broke.”
― Elizabeth Goudge, The Scent of Water
0 likes

“Without love, deeds, even the most brilliant, count as nothing.”
― St. Therese of Lisieux
131 likes

“Jesus is God drawn close to our wounded humanity, so close that he takes it upon himself—not merely in some general way but in a way that encompasses each one of us.”
― John Janaro, Never Give Up: My Life and God's Mercy
1 likes

“Angels can fly because they can take themselves lightly.”
― G.K. Chesterton, Orthodoxy
tags: inspirational-humor
496 likes

Tarquin Hall
author of: The Case of the Missing Servant

Alexander McCall Smith
author of: The No. 1 Ladies' Detective Agency

Charles Todd
author of: A Duty to the Dead

Benedict XVI
author of: Jesus of Nazareth: From the Baptism in the Jordan to the Transfiguration
More…

Polls voted on by Jennifer