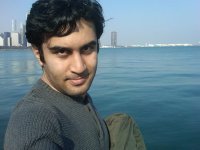 Ali Mohebi is currently reading
The Gift of Therapy: An Open Letter to a New Generation of Therapists and Their Patients
by Irvin D. Yalom
bookshelves: currently-reading

“In case you haven't noticed, as the result of a shamelessly rigged election in Florida, in which thousands of African Americans were arbitrarily disenfranchised, we now present ourselves to the rest of the world as proud, grinning, jut-jawed, pitiless war-lovers with appalling powerful weaponry - who stand unopposed.
In case you haven't noticed, we are now as feared and hated all over the world as the Nazi's once were.
And with good reason.
In case you haven't noticed, our unelected leaders have dehumanized millions and millions of human beings simply because of their religion and race. We wound 'em and kill 'em and torture 'em and imprison 'em all we want.
Piece of cake.
In case you haven't noticed, we also dehumanize our own soldiers, not because of their religion or race, but because of their low social class.
Send 'em anywhere. Make 'em do anything.
Piece of cake.
The O'Reilly Factor.
So I am a man without a country, except for the librarians and a Chicago paper called "In These Times."
Before we attacked Iraq, the majestic "New York Times" guaranteed there were weapons of destruction there.
Albert Einstein and Mark Twain gave up on the human race at the end of their lives, even though Twain hadn't even seen the First World War. War is now a form of TV entertainment, and what made the First World War so particularly entertaining were two American inventions, barbed wire and the machine gun.
Shrapnel was invented by an Englishman of the same name. Don't you wish you could have something named after you?
Like my distinct betters Einstein and Twain, I now give up on people too. I am a veteran of the Second World War and I have to say this is the not the first time I surrendered to a pitiless war machine.
My last words? "Life is no way to treat an animal, not even a mouse."
Napalm came from Harvard. Veritas!
Our president is a Christian? So was Adolf Hitler.
What can be said to our young people, now that psychopathic personalities, which is to say persons without consciences, without senses of pity or shame, have taken all the money in the treasuries of our government and corporations and made it all their own?”
― Kurt Vonnegut, A Man Without a Country
409 likes

“I could die for you. But I couldn't, and wouldn't, live for you.”
― Ayn Rand, The Fountainhead
tags: death, die, fountainhead, life, live, mortality
2860 likes

“You know how you finish a bag of chips and you hate yourself? You know you’ve done nothing good for yourself. That’s the same feeling, and you know it is, after some digital binge. You feel wasted and hollow and diminished.”
― Dave Eggers, The Circle
141 likes

“Freedom (n.): To ask nothing. To expect nothing. To depend on nothing.”
― Ayn Rand, The Fountainhead
tags: independence
2500 likes