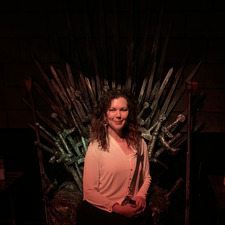 This will prevent Shannon from sending you messages, friend request or from viewing your profile. They will not be notified. Comments on discussion boards from them will be hidden by default.
Sign in to Goodreads to learn more about Shannon.

“Ryodan doesn’t like Mac. He never has. She got between him and his best boy-bud. I give him a look. “I’ll tell you a secret, Ryodan. You mess with her, Barrons’ll kill you.” I drag a finger across my neck. “Just like that. You aren’t all that. Barrons’ll stomp your ass, hand’s down.”

He smiles faintly. “I’ll be damned. You have a crush on Barrons.”

“You do, too. It’s all over your face. Anybody could see it.”

“I’m never wrong. You might as well take out a billboard. ‘Dani O’Malley thinks Jericho Barrons is hot.’ My offer to teach you is still open. Save you from future embarrassment. If I can see it on your face, he can, too. ”

“He never figured it out before,” I grumble then realize I just admitted it. Ryodan has a tricky way of wording things that makes you say things you didn’t mean to say. “Maybe I’ll ask Barrons to teach me,” I mutter and turn away from the stairs, heading for his office. I run smack into his chest. “Dude, move. Trying to get somewhere here.”

“No one but me is ever going to teach you, Dani.”

He touches me before I see it coming, has his hand under my chin, turning my face up. My shiver is instant and uncontrollable.

“That’s non-negotiable. You signed a contract with me that grants exclusivity. You won’t like it if you try to break it.”
― Karen Marie Moning, Iced

“Remember, we're madly in love, so it's all right to kiss me anytime you feel like it.”
― Suzanne Collins, The Hunger Games
tags: humor
17685 likes

“You’ll never be just anything. A tsunami can never be ‘just’ a wave.”
“Get off my chin.”
“I like that about you. Waves are banal. Tsunamis reshape the Earth. Under the right circumstances, even entire civilizations.”
I blink.
“You’re going to be one hell of a woman one day, Dani.”
― Karen Marie Moning, Iced
tags: dani-o-malley, ryodan
163 likes

Polls voted on by Shannon