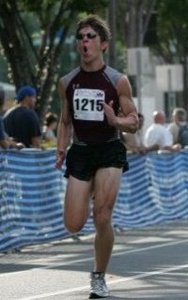 This will prevent Luke from sending you messages, friend request or from viewing your profile. They will not be notified. Comments on discussion boards from them will be hidden by default.
Sign in to Goodreads to learn more about Luke.

“Chronicler shook his head and Bast gave a frustrated sigh. "How about plays? Have you seen The Ghost and the Goosegirl or The Ha'penny King?"
Chronicler frowned. "Is that the one where the king sells his crown to an orphan boy?"
Bast nodded. "And the boy becomes a better king than the original. The goosegirl dresses like a countess and everyone is stunned by her grace and charm." He hesitated, struggling to find the words he wanted. "You see, there's a fundamental connection between seeming and being. Every Fae child knows this, but you mortals never seem to see. We understand how dangerous a mask can be. We all become what we pretend to be."
Chronicler relaxed a bit, sensing familiar ground. "That's basic psychology. You dress a beggar in fine clothes, people treat him like a noble, and he lives up to their expectations."
"That's only the smallest piece of it," Bast said. "The truth is deeper than that. It's..." Bast floundered for a moment. "It's like everyone tells a story about themselves inside their own head. Always. All the time. That story makes you what you are. We build ourselves out of that story."
Frowning, Chronicler opened his mouth, but Bast held up a hand to stop him. "No, listen. I've got it now. You meet a girl: shy, unassuming. If you tell her she's beautiful, she'll think you're sweet, but she won't believe you. She knows that beauty lies in your beholding." Bast gave a grudging shrug. "And sometimes that's enough."
His eyes brightened. "But there's a better way. You show her she is beautiful. You make mirrors of your eyes, prayers of your hands against her body. It is hard, very hard, but when she truly believes you..." Bast gestured excitedly. "Suddenly the story she tells herself in her own head changes. She transforms. She isn't seen as beautiful. She is beautiful, seen."
"What the hell is that supposed to mean?" Chronicler snapped. "You're just spouting nonsense now."
"I'm spouting too much sense for you to understand," Bast said testily. "But you're close enough to see my point.”
― Patrick Rothfuss, The Name of the Wind
tags: fae, mask, seeming, story
510 likes

Polls voted on by Luke