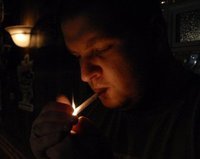 This will prevent Josh from sending you messages, friend request or from viewing your profile. They will not be notified. Comments on discussion boards from them will be hidden by default.
Sign in to Goodreads to learn more about Josh.

“The problem was you had to keep choosing between one evil or another, and no matter what you chose, they sliced a little bit more off you, until there was nothing left. At the age of 25 most people were finished. A whole god-damned nation of assholes driving automobiles, eating, having babies, doing everything in the worst way possible, like voting for the presidential candidates who reminded them most of themselves. I had no interests. I had no interest in anything. I had no idea how I was going to escape. At least the others had some taste for life. They seemed to understand something that I didn't understand. Maybe I was lacking. It was possible. I often felt inferior. I just wanted to get away from them. But there was no place to go.”
― Charles Bukowski
tags: bukowski
1239 likes

“There's nothing to mourn about death any more than there is to mourn about the growing of a flower. What is terrible is not death but the lives people live or don't live up until their death. They don't honor their own lives, they piss on their lives. They shit them away. Dumb fuckers. They concentrate too much on fucking, movies, money, family, fucking. Their minds are full of cotton. They swallow God without thinking, they swallow country without thinking. Soon they forget how to think, they let others think for them. Their brains are stuffed with cotton. They look ugly, they talk ugly, they walk ugly. Play them the great music of the centuries and they can't hear it. Most people's deaths are a sham. There's nothing left to die.”
― Charles Bukowski
1598 likes

Polls voted on by Josh