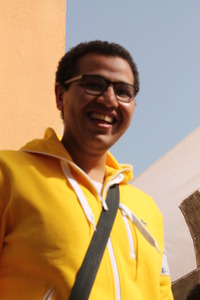 This will prevent Mohamed from sending you messages, friend request or from viewing your profile. They will not be notified. Comments on discussion boards from them will be hidden by default.
Sign in to Goodreads to learn more about Mohamed.

“How to stop time: kiss.
How to travel in time: read.
How to escape time: music.
How to feel time: write.
How to release time: breathe.”
― Matt Haig, Reasons to Stay Alive

“It is funny how people - millions and millions of people - go about watching the telly and singing and humming in spite of the fact that they lost brother or father or lover in a war; and what is stranger still, they contemplate with equanimity seeing their other brothers or lovers off to yet another war. They don't see the tragedy of it all. Now and then one of the millions reads a book, or starts thinking, or something shakes him, and then he sees tragedy all over the place. Wherever he looks, he finds tragedy. He finds it tragic that other people don't see this tragedy around them and then he becomes like Font or Edna, or joins some party or other, or marches behind banners until his own life, seen detachedly, becomes a little tragic.”
― Waguih Ghali, Beer in the Snooker Club
6 likes

Polls voted on by Mohamed