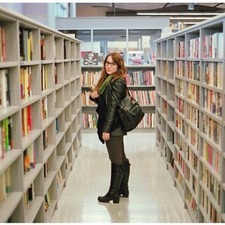 See all 6 books that Sarah is reading…

“I wanted to change the world. But I have found that the only thing one can be sure of changing is oneself.”
― Aldous Huxley, Point Counter Point
tags: change
1226 likes

“You can never get a cup of tea large enough or a book long enough to suit me.”
― C.S. Lewis
tags: books, inspirational, reading, tea
27390 likes

“The clock is a conspiracy & a crime against humanity
and I would not own one
except I miss appointments without it.”
― Brian Andreas, Story People

“The Savage interrupted him. "But isn't it natural to feel there's a God?"

"You might as well ask if it's natural to do up one's trousers with zippers," said the Controller sarcastically. "You remind me of another of those old fellows called Bradley. He defined philosophy as the finding of bad reason for what one believes by instinct. As if one believed anything by instinct! One believes things because one has been conditioned to believe them. Finding bad reasons for what one believes for other bad reasons–that's philosophy. People believe in God because they've been conditioned to.”
― Aldous Huxley, Brave New World

The Llama Library Goodreads Book — 49 members — last activity Jan 18, 2021 02:38PM
A group for members of the Llama Library Facebook group to find each other on goodreads. Moderators needed!