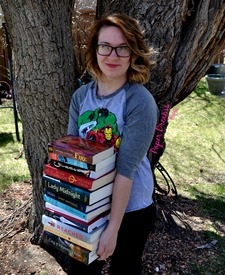 This will prevent Raquel from sending you messages, friend request or from viewing your profile. They will not be notified. Comments on discussion boards from them will be hidden by default.
Sign in to Goodreads to learn more about Raquel.

“With the new, unedited Saudi Arabian National Guard manuals stuffed in her briefcase and a piece of licorice dangling from her mouth, she follows Edward through the plant. He wants to show her the anti-tanks. “Can’t write about ’em, if you’ve never seen ’em.” But Vero doesn’t want to see them. She wants to believe in her own etymology: anti-tank = the opposite of tank Whatever the opposite of tank might be—she doesn’t care—a bouncy castle, a skateboard, a bar on wheels. Her capacity for denial is astonishing, matched only by her capacity for rationalization. She knows this. Again, she doesn’t care.”
― Angie Abdou, Between
1 likes

“That’s Cervella.” Vero’s hand picks at something in her hair, as she glares down at a disassembled bike. “This one’s his favourite. Do you bike?” Ligaya nods as she remembers the fat-tire red bike. Pedro’s. He let her borrow it to visit family in the next village. She touches her thighs as she remembers the feeling of freedom, covering such distance by the strength of her own legs, not minding at all when she had to ride home in the pouring rain, her sweat and the rainwater indistinguishable on her cheeks. Again, she feels the uncomfortable vertigo of her body being in one place and her mind in another, the two so far apart. But Vero does not wait for an answer. She pulls Ligaya—not roughly—her fingertips soft on the exposed skin of Ligaya’s wrist. But Ligaya is unaccustomed to touch. Nobody touched her at the Poons. She breathes deeply and counts the bikes. She must not flinch, wills herself not to pull away; she cannot afford to give offense. Vero twirls her around and points at a poster above the workbench. “That! Read it!” But Ligaya does not have to read it. Vero reads it for her. Since the bike makes little demand on material or energy resources, contributes little to pollution, makes a positive contribution to health and causes little death, or injury, it can be regarded as the most benevolent of machines. —Stuart S. Wilson She pauses as if she might expect a response this time. She gestures at the room stuffed with bikes until it seems the very walls and ceiling are made of bikes, the scent of rubber tires replacing oxygen. “Ridiculous, right? The bike will save the world, he says. Yes, but you just need one, I say. One bike. That I can see. That I can even admire. I’m sure Stuart buddy here couldn’t even imagine this … this … biketrocity. And that he should be to blame?!”
― Angie Abdou, Between
1 likes

“A room without books is like a body without a soul.”
― Marcus Tullius Cicero
tags: attributed-no-source, books, simile, soul
124976 likes

Painting (Literature & Fiction)
1 chapters   —   updated Jun 08, 2010 08:12PM
Description: About a painting described but leaves off a sense that there is more too it. More than meets the eye.

Emily Giffin
author of: Something Borrowed

Polls voted on by Raquel