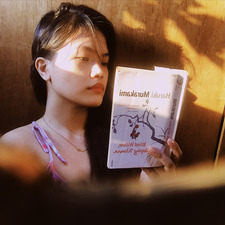 This will prevent Lizbeth from sending you messages, friend request or from viewing your profile. They will not be notified. Comments on discussion boards from them will be hidden by default.
Sign in to Goodreads to learn more about Lizbeth.

“I absolutely look at people’s bookshelves. And I have some judgment. I mean, they’re openly showing you themselves.”
― Andrew Sean Greer
tags: books, bookshelves, judgment, personality, reading
8 likes

“The case is very plain before me. In leaving England, I should leave a loved but empty land — Mr. Rochester is not there; and if he were, what is, what can that ever be to me? My business is to live without him now: nothing so absurd, so weak as to drag on from day to day, as if I were waiting some impossible change in circumstances, which might reunite me to him. Of course (as St. John once said) I must seek another interest in life to replace the one lost: is not the occupation he now offers me truly the most glorious man can adopt or God assign? Is it not, by its noble cares and sublime results, the one best calculated to fill the void left by uptorn affections and demolished hopes? I believe I must say, Yes — and yet I shudder.”
― Charlotte Brontë
tags: jane-eyre, lost-love
5 likes

“I was my own woman.
The next step was to find the proper sort of man.”
― Sylvia Plath, The Bell Jar
tags: inspirational, women-s-strength
94 likes

“a woman who contributes to the life of mankind by the occupation of motherhood is taking as high a place in the division of human labor as anyone else could take. If she is interested in the lives of her children and is paving the way for them to become fellow men, if she is spreading their interests and training them to cooperate, her work is so valuable that it can never be rightly rewarded. In our own culture the work of a mother is undervalued and often regarded as a not very attractive or estimable occupation. It is paid only indirectly and a woman who makes it her main occupation is generally placed in a position of economic dependence. The success of the family, however, rests equally upon the work of the mother and the work of the father. Whether the mother keeps house or works independently, her work as a mother does not play a lower role than the work of her husband.”
― Alfred Adler, WHAT LIFE COULD MEAN TO YOU
17 likes

Khanh, first of her name, mother of bunnies

Charles Dickens
author of: A Tale of Two Cities

George R.R. Martin
author of: A Game of Thrones
More…

Jezebel's Books All Women Should Read

Polls voted on by Lizbeth