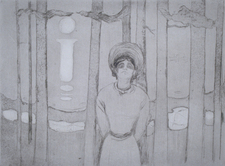 This will prevent Johanna from sending you messages, friend request or from viewing your profile. They will not be notified. Comments on discussion boards from them will be hidden by default.
Sign in to Goodreads to learn more about Johanna.

See all 4 books that Johanna is reading…

Queerly Loving: Volume One by G. Benson
1 highlight
I was too busy trying to think of ways I could defeat Nick and steal his body for my own, leaving his dumb ass stranded in the fourth dimension.

“What did those people teach you?" he asked me one night, mystified. "What exactly do Catholics believe?"

I'd been preparing my whole life for this question. "First of all, blood. BLOOD. Second of all, thorns. Third of all, put dirt on your forehead. Do it right now. Fourth of all, Martin Luther was a pig in a cloak. Fifth of all, Jesus is alive, but he's also dead, and he's also immortal, but he's also made of clouds, and his face is a picture of infinite peace, but he also always looks like one of those men in a headache commercial, because you'rec causing him so much suffering whenever you cuss. He is so gentle that sheep seem like demented murderers in his presence, but also rays of sunlight shoot out of his face so hard they can kill people. In fact, they do kill people, and one day they will kill you. He has a tattoo of a daisy on his lower back and he gets his hair permed every eight weeks. He's wearing a flowing white dress, but only because people didn't know about jeans back then. He's holding up two fingers because his dad won't let him have a gun. If he lived on earth, he would have a white truck, plastered with bumper stickers of Calvin peeing on a smaller Calvin who is not a Catholic."

Jason was aghast. "Thorns?" he whispered. "But that's the most dangerous part of the rose.”
― Patricia Lockwood, Priestdaddy
tags: catholicism, jesus, religion
6 likes

“If you are not friends with women, they are theoretical to you.”
― Patricia Lockwood, Priestdaddy
3 likes

“What a comfort is this journal. I tell myself to myself and throw the burden on my book and feel relieved.”
― Anne Lister, I Know My Own Heart: The Diaries, 1791-1840
tags: book, journal, writing
10 likes

“How am I still held by the code of silence? Why do I feel it's a betrayal to even write this down, these facts that float freely in the public domain? "Oh, a member of the media," as if the collection, arrangement, and publication of the facts is the real crime. Renata Adler wrote: " 'He has suffered enough' meant if we investigate this matter any further, it will turn out our friends are in it, too.”
― Patricia Lockwood, Priestdaddy
0 likes

“Did you know rats in big cities are getting aggressive from eating too many cigarette butts? They're addicted to nicotine and they want more." - Karen Lockwood, nearly screaming, while eating an omelet at a breakfast restaurant in the year of our Lord 2013”
― Patricia Lockwood, Priestdaddy
0 likes

Polls voted on by Johanna