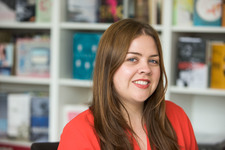 This will prevent Sinead Heneghan from sending you messages, friend request or from viewing your profile. They will not be notified. Comments on discussion boards from them will be hidden by default.
Sign in to Goodreads to learn more about Sinead Heneghan .

“Poetry is written with tears, fiction with blood, and history with invisible ink.”
― Carlos Ruiz Zafón, The Angel's Game
285 likes

“Envy is the religion of the mediocre. It comforts them, it soothes their worries, and finally it rots their souls, allowing them to justify their meanness and their greed until they believe these to be virtues. Such people are convinced that the doors of heaven will be opened only to poor wretches like themselves who go through life without leaving any trace but their threadbare attempts to belittle others and to exclude - and destroy if possible - those who, by the simple fact of their existence, show up their own poorness of spirit, mind, and guts. Blessed be the one at whom the fools bark, because his soul will never belong to them.”
― Carlos Ruiz Zafón, The Angel's Game
tags: envy
457 likes

“A writer never forgets the first time he accepted a few coins or a word of praise in exchange for a story. He will never forget the sweet poison of vanity in his blood and the belief that, if he succeeds in not letting anyone discover his lack of talent, the dream of literature will provide him with a roof over his head, a hot meal at the end of the day, and what he covets the most: his name printed on a miserable piece of paper that surely will outlive him. A writer is condemned to remember that moment, because from then on he is doomed and his soul has a price.”
― Carlos Ruiz Zafon, The Angel's Game
tags: the-angel-s-game
211 likes

“Every book has a soul, the soul of the person who wrote it and the soul of those who read it and dream about it.”
― Carlos Ruiz Zafón, The Angel's Game
tags: book, dreams, soul
726 likes

Polls voted on by Sinead Heneghan