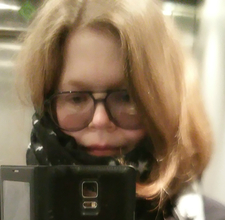 This will prevent Karina from sending you messages, friend request or from viewing your profile. They will not be notified. Comments on discussion boards from them will be hidden by default.
Sign in to Goodreads to learn more about Karina.

Mr. Splitfoot by Samantha Hunt
1 highlight
I cultivate a public persona based on my love of rice pudding.

“Like every other creature on the face of the earth, Godfrey was, by birthright, a stupendous badass, albeit in the somewhat narrow technical sense that he could trace his ancestry back up a long line of slightly less highly evolved stupendous badasses to that first self-replicating gizmo---which, given the number and variety of its descendants, might justifiably be described as the most stupendous badass of all time. Everyone and everything that wasn't a stupendous badass was dead.”
― Neal Stephenson, Cryptonomicon
tags: historical-fiction, humor, internet, neal, stephenson, wwii
102 likes

“Since no one is perfect, it follows that all great deeds have been accomplished out of imperfection. Yet they were accomplished, somehow, all the same.”
― Lois McMaster Bujold, Mirror Dance
tags: imperfection
144 likes

“Since he was very young he had known that in certain ways he was unlike anyone else he knew. For a child the consciousness of such difference is very painful, since, having done nothing yet and being incapable of doing anything, he cannot justify it. The reliable and affectionate presence of adults who are also, in their own way, different, is the only reassurance such a child can have; and Shevek had not had it. His father had indeed been utterly reliable and affectionate. Whatever Shevek was and whatever he did, Palat approved and was loyal. But Palat had not had this curse of difference. He was like the others, like all the others to whom community came so easy. He loved Shevek, but he could not show him what freedom is, that recognition of each person's solitude which alone transcends it.”
― Ursula K. Le Guin, The Dispossessed: An Ambiguous Utopia
14 likes

“The trouble with having an open mind, of course, is that people will insist on coming along and trying to put things in it.”
― Terry Pratchett, Diggers
tags: humor, open-mind, thinking
21092 likes

You Read a Book about What?

Polls voted on by Karina