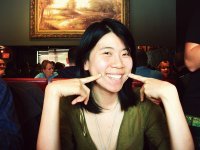 This will prevent Karen from sending you messages, friend request or from viewing your profile. They will not be notified. Comments on discussion boards from them will be hidden by default.
Sign in to Goodreads to learn more about Karen.

Karen Quinn is currently reading
Lao Tzu: Tao Te Ching: A Book about the Way and the Power of the Way
by Lao Tzu
bookshelves: currently-reading

Karen Quinn is currently reading
Outside Of The Body There Is Something Like Hope
by Joshua Jennifer Espinoza (Goodreads Author)
bookshelves: currently-reading

See all 6 books that Karen is reading…

“Your life must be an open city, with all sorts of ways to wander in.”
― Robin Sloan, Mr. Penumbra's 24-Hour Bookstore
220 likes

“To borrow against the trust someone has placed in you costs nothing at first. You get away with it, you take a little more and a little more until there is no more to draw on. Oddly, your hands should be full with all that taking but when you open them there’s nothing there.”
― Jeanette Winterson, Written on the Body
tags: trust
378 likes

“Neel cuts in: "Where'd you grow up?"
"Palo Alto," she says. From there to Stanford to Google: for a girl obsessed with the outer limits of human potential, Kat has stayed pretty close to home.
Neel nods knowingly. "The suburban mind cannot comprehend the emergent complexity of a New York sidewalk."
"I don't know about that," Kat says, narrowing her eyes. "I'm pretty good with complexity."
"See, I know what you're thinking," Neel says, shaking his head.
"You're thinking it's just an agent-based simulation, and everybody out here follows a pretty simple set of rules"-- Kat is nodding--"and if you can figure out those rules, you can model it. You can simulate the street, then the neighborhood, then the whole city. Right?"
"Exactly. I mean, sure, I don't know what the rules are yet, but I could experiment and figure them out, and then it would be trivial--"
"Wrong," Neel says, honking like a game-show buzzer. "You can't do it. Even if you know the rules-- and by the way, there are no rules--but even if there were, you can't model it. You know why?"

My best friend and my girlfriend are sparring over simulations. I can only sit back and listen.

Kat frowns. "Why?"
"You don't have enough memory."
"Oh, come on--"
"Nope. You could never hold it all in memory. No computer's big enough. Not even your what's-it-called--"
"The Big Box."
"That's the one. It's not big enough. This box--" Neel stretches out his hands, encompasses the sidewalk, the park, the streets beyond--"is bigger."

“It was one thing to make a mistake; it was another thing to keep making it. I knew what happened when you let yourself get close to someone, when you started to believe they loved you: you'd be disappointed. Depend on someone, and you might as well admit you're going to be crushed, because when you really needed them, they wouldn't be there. Either that, or you'd confide in them and you added to their problems. All you ever really had was yourself, and that sort of sucked if you were less than reliable.”
― Jodi Picoult, Handle with Care
tags: disappointment, loves-ones, mistakes, self-reliance, trust
1824 likes

“I have a history of making decisions very quickly about men. I have always fallen in love fast and without measuring risks. I have a tendency not only to see the best in everyone, but to assume that everyone is emotionally capable of reaching his highest potential. I have fallen in love more times than I care to count with the highest potential of a man, rather than with the man himself, and I have hung on to the relationship for a long time (sometimes far too long) waiting for the man to ascend to his own greatness. Many times in romance I have been a victim of my own optimism.”
― Elizabeth Gilbert, Eat, Pray, Love
tags: disappointment, love, romance
7258 likes

Polls voted on by Karen