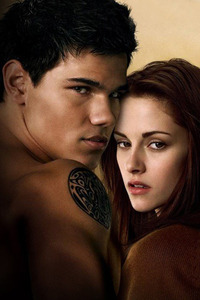 This will prevent Lindsay from sending you messages, friend request or from viewing your profile. They will not be notified. Comments on discussion boards from them will be hidden by default.
Sign in to Goodreads to learn more about Lindsay.

“Surely it was a good way to die, in the place of someone else, someone I loved.”
― Stephenie Meyer, Twilight
tags: death, love, self-sacrifice
635 likes

“Peeta, you said at the interview you’d had a crush on me forever. When did forever start?

Oh, let’s see. I guess the first day of school. We were five. You had on a red plaid dress and your hair...it was in two braids instead of one. My father pointed you out when we were waiting to line up."

He said, ‘See that little girl? I wanted to marry her mother, but she ran off with a coal miner.'"

What? You’re making that up!"

No, true story. And I said, 'A coal miner? Why did she want a coal miner if she could’ve had you?' And he said, 'Because when he sings...even the birds stop to listen.”
― Suzanne Collins, The Hunger Games
3454 likes

“I am not really breaking any rules. Charlie said I could never take another step through the door again... I came in through the window... Still, the intent was clear," said Edward.”
― Stephenie Meyer, Twilight
tags: bella, edward, humor, rules
267 likes

“Why am I covered in feathers?" I asked, confused.
He exhaled impatiently. "I bit a pillow. Or two...”
― Stephenie Meyer, Breaking Dawn
tags: bella-swan, edward-cullen, honeymoon, passion
339 likes

Henry Wadsworth Longfellow
author of: The Song of Hiawatha

Groucho Marx
author of: Groucho and Me

Nicholas Sparks
author of: The Notebook

Erin Hunter
author of: Into the Wild

Books You Wish You Could Force All Your Friends to Read

Polls voted on by Lindsay