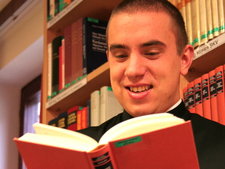 This will prevent Pater Edmund from sending you messages, friend request or from viewing your profile. They will not be notified. Comments on discussion boards from them will be hidden by default.
Sign in to Goodreads to learn more about Pater Edmund.

Pater Edmund is currently reading
The Managerial Revolution: What Is Happening in the World
by James Burnham
bookshelves: currently-reading

See all 192 books that Pater Edmund is reading…

“Young men, especially in America, write to me and ask me to recommend “a course of reading.” Distrust a course of reading! People who really care for books read all of them. There is no other course.”
― Andrew Lang, Adventures Among Books
tags: reading
105 likes

“You can never be wise unless you love reading.”
― Samuel Johnson, Life of Johnson, Vol 4
tags: reading
52 likes

“A man inherited a field in which was an accumulation of old stone, part of an older hall. Of the old stone some had already been used in building the house in which he actually lived, not far from the old house of his fathers. Of the rest he took some and built a tower. But his friends coming perceived at once (without troubling to climb the steps) that these stones had formerly belonged to a more ancient building. So they pushed the tower over, with no little labour, and in order to look for hidden carvings and inscriptions, or to discover whence the man's distant forefathers had obtained their building material. Some suspecting a deposit of coal under the soil began to dig for it, and forgot even the stones. They all said: 'This tower is most interesting.' But they also said (after pushing it over): 'What a muddle it is in!' And even the man's own descendants, who might have been expected to consider what he had been about, were heard to murmur: 'He is such an odd fellow! Imagine using these old stones just to build a nonsensical tower! Why did not he restore the old house? he had no sense of proportion.' But from the top of that tower the man had been able to look out upon the sea.”
― J.R.R. Tolkien, Beowulf and the Critics
tags: allegory, beowulf, criticism, critics, fantasy, literature
102 likes

“A man ought to read just as inclination leads him; for what he reads as a task will do him little good.”
― Samuel Johnson, The Life of Samuel Johnson, Vol 2
tags: reading
55 likes

“Idleness is the enemy of the soul; and therefore the brethren ought to be employed in manual labor at certain times, at others, in devout reading.”
― Benedict of Nursia, The Rule of Saint Benedict
tags: idleness, reading, work
43 likes

Polls voted on by Pater Edmund