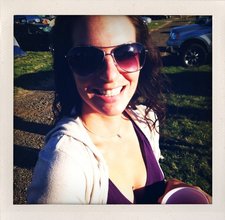 Ashley is currently reading
What Happened To You?: Conversations on Trauma, Resilience, and Healing
by Bruce D. Perry
bookshelves: currently-reading

“Steve Jobs thus became the greatest business executive of our era, the one most certain to be remembered a century from now. History will place him in the pantheon right next to Edison and Ford. More than anyone else of this time, he made products that were completely innovative, combining the power of poetry and processors. With a ferocity that could make working with him as unsettling as it was inspiring, he also built the world's most creative company. And he was able to infuse into its DNA the design sensibilities, perfectionism, and imagination that make it likely to be, even decades from now, the company that thrives best at the intersection of artistry and technology.”
― Walter Isaacson, Steve Jobs
tags: apple, steve-jobs
16 likes

“Even though I complain sometimes," it said, "it's because I'm the heart of a person, and people's hearts are that way. People are afraid to pursue their most important dreams, because they feel that they don't deserve them, or that they'll be unable to achieve them.”
― Paulo Coelho, The Alchemist
tags: goals-in-life, inspirational, the-heart
13 likes

“It had nothing to do with gear or footwear or the backpacking fads or philosophies of any particular era or even with getting from point A to point B.

It had to do with how it felt to be in the wild. With what it was like to walk for miles with no reason other than to witness the accumulation of trees and meadows, mountains and deserts, streams and rocks, rivers and grasses, sunrises and sunsets. The experience was powerful and fundamental. It seemed to me that it had always felt like this to be a human in the wild, and as long as the wild existed it would always feel this way.”
― Cheryl Strayed, Wild: From Lost to Found on the Pacific Crest Trail
tags: cheryl-strayed, hiking, pacific-crest-trail, wild, wilderness
395 likes

“Never have I know spirits so low they could not be raised by hearing of a Frenchman eaten by a shark!”
― Ben H. Winters
2 likes

“What am I at war with? My cancer. And what is my cancer? My cancer is me. The tumors are made of me. They're made of me as surely as my brain and my heart are made of me. It is a civil war, Hazel Grace, with a predetermined winner.”
― John Green, The Fault in Our Stars
tags: cancer
5 likes