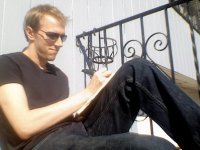 “Yeah, and I wanted to help him with them, like he helped me.” “That is his choice, though. Some people, they do not want to be helped.”
― Alexis Hall, Boyfriend Material
1 likes

“You wanna fly, you got to give up the shit that weighs you down.”
― Toni Morrison, Song of Solomon
tags: burdens, empowerment, flying, freedom, unburdening, weight
3665 likes

“When my husband died, because he was so famous and known for not being a believer, many people would come up to me-it still sometimes happens-and ask me if Carl changed at the end and converted to a belief in an afterlife. They also frequently ask me if I think I will see him again. Carl faced his death with unflagging courage and never sought refuge in illusions. The tragedy was that we knew we would never see each other again. I don't ever expect to be reunited with Carl. But, the great thing is that when we were together, for nearly twenty years, we lived with a vivid appreciation of how brief and precious life is. We never trivialized the meaning of death by pretending it was anything other than a final parting. Every single moment that we were alive and we were together was miraculous-not miraculous in the sense of inexplicable or supernatural. We knew we were beneficiaries of chance. . . . That pure chance could be so generous and so kind. . . . That we could find each other, as Carl wrote so beautifully in Cosmos, you know, in the vastness of space and the immensity of time. . . . That we could be together for twenty years. That is something which sustains me and it’s much more meaningful. . . . The way he treated me and the way I treated him, the way we took care of each other and our family, while he lived. That is so much more important than the idea I will see him someday. I don't think I'll ever see Carl again. But I saw him. We saw each other. We found each other in the cosmos, and that was wonderful.”
― Ann Druyan
tags: afterlife, ann-druyan, atheism, belief, carl-sagan, cosmos, love, sagan, superstition, true-love
703 likes