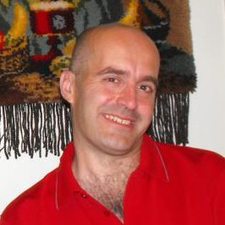 This will prevent Steven from sending you messages, friend request or from viewing your profile. They will not be notified. Comments on discussion boards from them will be hidden by default.
Sign in to Goodreads to learn more about Steven.

“We all know that a book is not really a person. It isn’t a human being. But if you are a lover of books as books – as objects, that is – and ignore the human element in them – that is, their voices – you will be committing an error of the soul, because you will be an idolator, or else a fetishist.”
― Margaret Atwood
11 likes

“In the light, we read the inventions of others; in the darkness we invent our own stories. ”
― Alberto Manguel, The Library at Night
tags: dark, light, read, stories, write
173 likes

“He placed a pinch of snow on his tongue and thought of making snow ice cream with Frank and their mother when they were small boys - 'First you stir in the vanilla' - Frank standing on a stool on his wondrously functional pre-Libya legs, the bullet that would sever his spinal cord still twenty-five years away but already approaching: a woman giving birth to a child who will someday pull the trigger on a gun, a designer sketching the weapon or its precursor, a dictator making a decision that will spark in the fullness of time into the conflagration that Frank will go overseas to cover for Reuters, the pieces of a pattern drifting closer together.”
― Emily St. John Mandel, Station Eleven
tags: birth, bullet, conflagration, designer, dictator, frank-chaudhary, functional, jeevan-chaudhary, libya, paraplegic, patterns, pieces, reuters, snow, snow-cream, spinal-cord, the-fullness-of-time, tongue, vanilla, wondrous
3 likes

“You can lead a horse to water, but a pencil must be lead.”
― Stan Laurel
tags: humor, laurel-and-hardy, laurel-hardy, stan-laurel
26 likes

Polls voted on by Steven