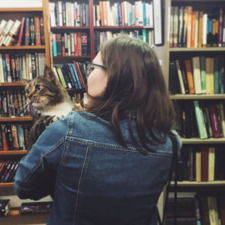 Bri (readingknitter.com) is currently reading
She Has Her Mother's Laugh: The Powers, Perversions, and Potential of Heredity
by Carl Zimmer (Goodreads Author)
bookshelves: currently-reading

See all 10 books that Bri (readingknitter.com) is reading…

“You don't know how to talk to people you don't like. Don't love, really. You can't live in the world with such strong likes and dislikes.”
― J.D. Salinger, Franny and Zooey
tags: self
348 likes

“He was rather like a Christmas tree whose lights, wired in series, must all go out if even one bulb is defective.”
― J.D. Salinger, Nine Stories
tags: for-esme
7 likes

“...things get broken, and sometimes they get repaired, and in most cases, you realize that no matter what gets damaged, life rearranges itself to compensate for your loss, sometimes wonderfully.”
― Hanya Yanagihara, A Little Life
1111 likes

“If you grew up in a house where you weren't loved, you didn't know there was an alternative. If you grew up with emotionally stunted parents, who were unhappy in their marriage and prone to visit that unhappiness on their children, you didn't know they were doing this. It was just your life. If you had an accident, at the age of four, when you were supposed to be a big boy, and were later served a plate of feces at the dinner table - if you were told to eat it because you liked it, didn't you, you must like it or you wouldn't have so many accidents - you didn't know that this wasn't happening in the other houses in your neighborhood. If your father left your family, and disappeared, never to return, and your mother seemed to resent you, as you grew older, for being the same sex as your father, you had no one to turn to. In all these cases, the damage was done before you knew you were damaged. The worst part was that, as the years passed, these memories became, in the way you kept them in a secret box in your head, taking them out every so often to turn them over and over, something like dear possessions. They were the key to your unhappiness. The were the evidence that life wasn't fair. If you weren't a lucky child, you didn't know you weren't lucky until you got older. And then it was all you ever thought about.”
― Jeffrey Eugenides, The Marriage Plot
57 likes

Polls voted on by Bri (readingknitter.com)