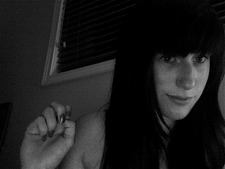 This will prevent Charlotte from sending you messages, friend request or from viewing your profile. They will not be notified. Comments on discussion boards from them will be hidden by default.
Sign in to Goodreads to learn more about Charlotte.

“I understood why she did it. At that moment I knew why people tagged graffiti on the walls of neat little houses and scratched the paint on new cars and beat up well-tended children. It was only natural to want to destroy something you could never have.”
― Janet Fitch, White Oleander
tags: spite
286 likes

“THE DEATH OF LEOPOLD GURSKY
Leopold Gursky started dying on August 18, 1920.
He died learning to walk.
He died standing at the blackboard.
And once, also, carrying a heavy tray.
He died practicing a new way to sign his name.
Opening a window.
Washing his genitals in the bath.
He died alone, because he was too embarrassed to phone anyone.
Or he died thinking about Alma.
Or when he chose not to.”
― Nicole Krauss, The History of Love
38 likes

“It was love at first sight, at last sight, at ever and ever sight.”
― Vladimir Nabokov, Lolita
tags: humbert-humbert, love
5968 likes

“I walked down my snow covered street. Out of habit I turned and checked for my footsteps. When I arrived at my building I looked for my name on the buzzers. And because I know that sometimes I see things that aren't there, after dinner I called Information to ask if I was listed.(25)”
― Nicole Krauss, The History of Love
10 likes

“I try to make a point of being seen. Sometimes when I'm out, I'll buy a juice even when I'm not thirsty. If the store is crowded I'll even go so far as dropping change all over the floor, nickels and dimes skidding in every direction. All I want is not to die on a day I went unseen.”
― Nicole Krauss, The History of Love
122 likes

Polls voted on by Charlotte