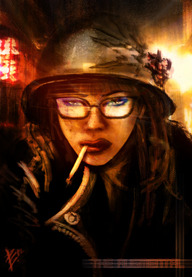 This will prevent Boden from sending you messages, friend request or from viewing your profile. They will not be notified. Comments on discussion boards from them will be hidden by default.
Sign in to Goodreads to learn more about Boden.

“I think that writers are made, not born or created out of dreams of childhood trauma—that becoming a writer (or a painter, actor, director, dancer, and so on) is a direct result of conscious will. Of course there has to be some talent involved, but talent is a dreadfully cheap commodity, cheaper than table salt. What separates the talented individual from the successful one is a lot of hard work and study; a constant process of honing. Talent is a dull knife that will cut nothing unless it is wielded with great force—a force so great the knife is not really cutting at all but bludgeoning and breaking (and after two or three of these gargantuan swipes it may succeed in breaking itself…which may be what happened to such disparate writers as Ross Lockridge and Robert E. Howard). Discipline and constant work are the whetstones upon which the dull knife of talent is honed until it becomes sharp enough, hopefully, to cut through even the toughest meat and gristle. No writer, painter, or actor—no artist—is ever handed a sharp knife (although a few are handed almighty big ones; the name we give to the artist with the big knife is “genius”), and we hone with varying degrees of zeal and aptitude.”
― Stephen King, Danse Macabre
tags: ability, genius, talent, writing
14 likes

“Something about the time of year depressed him deeply. Overcast skies and cutting wind, leaves falling, dusk falling, dark too soon, night flying down before you are ready. It's a terror. It's a bareness of the soul. He hears the rustle of nuns. Here comes winter in the bone. We've set it loose on the land. There must be some song or poem, some folk magic we can use to ease this fear. Skelly Bone Pete. Here it is in the landscape and sky. We've set it loose. We've opened up the ground and here it is. He took Interstate 45 south. He didn't want them to kill Leon. He felt a saturating sense of death, a dread in the soft filling of his bones, the suckable part, approaching Galveston now.”
― Don DeLillo, Libra
tags: autumn, don-delillo, libra, skelly-bone-pete
9 likes

“I long for the days of disorder. I want them back, the days when I was alive on the earth, rippling in the quick of my skin, heedless and real. I was dumb-muscled and angry and real. This is what I long for, the breach of peace, the days of disarray when I walked real streets and did things slap-bang and felt angry and ready all the time, a danger to others and a distant mystery to myself.”
― Don DeLillo, Underworld
50 likes

“The brain appears to possess a special area which we might call poetic memory and which records everything that charms or touches us, that makes our lives beautiful ... Love begins with a metaphor. Which is to say, love begins at the point when a woman enters her first word into our poetic memory.”
― Milan Kundera, The Unbearable Lightness of Being
838 likes

“Awakened by a thousand dogs, a passing truck, the tailspin of a poisoned mosquito (or, perhaps, merely the silence of my dreams), I had, before remembering who and where I was, seen only that green sun suspended in the firmament of my room (her uterus bottled in preserving fluids) and, through seconds that became millennia, millennia aeons, felt the steadfastness of my orbit around that cold glow of love, a marvelous fatal steadfastness, before my pupils dilated and shadows and unease once more defined reality, the steel box naked but for a mattress and insomnious bugs where I had lived, in a coma of heartbreak and drunkenness, the six months since Primavera's death.”
― Richard Calder, Dead Girls, Dead Boys, Dead Things
tags: opening-sentences
6 likes

Ted Chiang
author of: Stories of Your Life and Others

Polls voted on by Boden