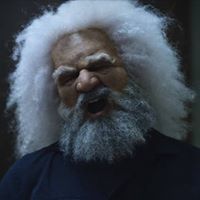 This will prevent Justin from sending you messages, friend request or from viewing your profile. They will not be notified. Comments on discussion boards from them will be hidden by default.
Sign in to Goodreads to learn more about Justin.

“I shook again, tasted plum, and suddenly the words were pouring out of me."She said I sang before I spoke. She said when I was just a baby she had the habit of humming when she held me. Nothing like a song. Just a descending third. Just a soothing sound. Then one day she was walking me around the camp, and she heard me echo it back to her. Two octaves higher. A tiny piping third. She said it was my first song. We sang it back and forth to each other. For years."I choked and clenched my teeth.
"You can say it,"Auri said softly."It's okay if you say it."
"I'm never going to see her again,"I choked out. Then I began to cry in earnest.
"It's okay,"Auri said softly."I'm here. You're safe.”
― Patrick Rothfuss, The Wise Man's Fear
tags: auri, baby, crying, friendship, kvothe, longing-for-past, love, my-first-song, pain, plum, safe, song
33 likes

Polls voted on by Justin