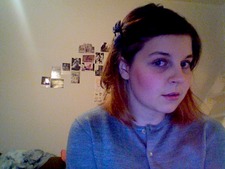 This will prevent Elina from sending you messages, friend request or from viewing your profile. They will not be notified. Comments on discussion boards from them will be hidden by default.
Sign in to Goodreads to learn more about Elina.

See all 9 books that Elina is reading…

“For every reader who dies today, a viewer is born, and we seem to be witnessing . . . the final tipping balance.”
― Jonathan Franzen, How to be Alone
26 likes

“I don't know what good it is to know so much and be smart as whips and all if it doesn't make you happy.”
― J.D. Salinger, Franny and Zooey
tags: happiness, intelligence
613 likes

“You don't know how to talk to people you don't like. Don't love, really. You can't live in the world with such strong likes and dislikes.”
― J.D. Salinger, Franny and Zooey
tags: self
365 likes

“I still had this idea that there was a whole world of marvelous golden people somewhere, as far ahead of me as the seniors at Rye when I was in the sixth grade; people who knew everything instinctively, who made their lives work out the way they wanted without even trying, who never had to make the best of a bad job because it never occured to them to do anything less then perfectly the first time. Sort of heroic super-people, all of them beautiful and witty and calm and kind, and I always imagined that when I did find them I'd suddenly know that I Belonged among them, that I was one of them, that I'd been meant to be one of them all along, and everything in the meantime had been a mistake; and they'd know it too. I'd be like the ugly duckling among the swans.”
― Richard Yates, Revolutionary Road
tags: longing, trying-to-fit-in, waiting-to-fit-in
142 likes

Polls voted on by Elina