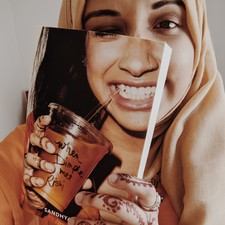 This will prevent Nadia from sending you messages, friend request or from viewing your profile. They will not be notified. Comments on discussion boards from them will be hidden by default.
Sign in to Goodreads to learn more about Nadia.

“Life is a book and there are a thousand pages I have not yet read.”
― Cassandra Clare, Clockwork Princess
tags: chapter-24, life, will-herondale
8206 likes

“I might be in love with you." He smiles a little. "I'm waiting until I'm sure to tell you, though.”
― Veronica Roth, Divergent
tags: humorous
8413 likes

“You honestly expect me to breathe in a world without air?”
― Renee Ahdieh, The Wrath and the Dawn
tags: breathe, love
484 likes

“One thing I know: For helping me forget how awful the world is, I prefer her to alcohol.”
― Veronica Roth, Four: A Divergent Story Collection
tags: allegiant, beatrice-prior, divergent, four, insurgent, tobias-eaton, tris, veronica-roth
202 likes

“He glares at me as if he already hates it. “What is it?” I consider lying but what’s the point? I clear my throat. “Pooky Bear."
He’s silent for so long I’m beginning to think he didn’t hear me when he finally says, “Pooky. Bear.” “It was just a little joke. I didn’t know.”
“I’ve mentioned that names have power, right? Do you realize that when she fights battles, she’s going to have to announce herself to the opposing sword? She’ll be forced to say something ridiculous like, ‘I am Pooky Bear, from an ancient line of archangel swords.’ Or, ‘Bow down to me, Pooky Bear, who has only two other equals in all the worlds.’ ” He shakes his head. “How is she going to get any respect?”
― Susan Ee, World After
tags: pooky-bear, raffe
618 likes

Polls voted on by Nadia