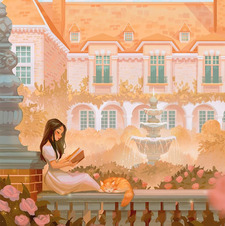 This will prevent Jamieanne from sending you messages, friend request or from viewing your profile. They will not be notified. Comments on discussion boards from them will be hidden by default.
Sign in to Goodreads to learn more about Jamieanne.

“Then the old man got to cussing, and cussed everything and everybody he could think of, and then cussed them all over again to make sure he hadn't skipped any, and after that he polished off with a kind of a general cuss all round, including a considerable parcel of people which he didn't know the names of, and so called them what's-his-name, when he got to them, and went right along with his cussing.”
― Mark Twain, The Adventures of Huckleberry Finn
18 likes

“Then she told me all about the bad place, and said I wished I was there. She got mad, then, but I didn't mean no harm. All I wanted was to go somewheres, all I wanted was a change, I warn't particular”
― Mark Twain, The Adventures of Huckleberry Finn
10 likes

“My, you ought to seen old Henry the Eight when he was in bloom. He was a blossom. He used to marry a new wife every day, and chop off her head next morning. And he would do it just as indifferent as if he was ordering up eggs. 'Fetch up Nell Gwynn,' he says. They fetch her up. Next morning, 'Chop off her head!' And they chop it off. 'Fetch up Jane Shore,' he says; and up she comes, Next morning, 'Chop off her head'—and they chop it off. 'Ring up Fair Rosamun.' Fair Rosamun answers the bell. Next morning, 'Chop off her head.' And he made every one of them tell him a tale every night; and he kept that up till he had hogged a thousand and one tales that way, and then he put them all in a book, and called it Domesday Book—which was a good name and stated the case. You don't know kings, Jim, but I know them; and this old rip of ourn is one of the cleanest I've struck in history. Well, Henry he takes a notion he wants to get up some trouble with this country. How does he go at it—give notice?—give the country a show? No. All of a sudden he heaves all the tea in Boston Harbor overboard, and whacks out a declaration of independence, and dares them to come on. That was his style—he never give anybody a chance. He had suspicions of his father, the Duke of Wellington. Well, what did he do? Ask him to show up? No—drownded him in a butt of mamsey, like a cat. S'pose people left money laying around where he was—what did he do? He collared it. S'pose he contracted to do a thing, and you paid him, and didn't set down there and see that he done it—what did he do? He always done the other thing. S'pose he opened his mouth—what then? If he didn't shut it up powerful quick he'd lose a lie every time. That's the kind of a bug Henry was; and if we'd a had him along 'stead of our kings he'd a fooled that town a heap worse than ourn done. I don't say that ourn is lambs, because they ain't, when you come right down to the cold facts; but they ain't nothing to that old ram, anyway. All I say is, kings is kings, and you got to make allowances. Take them all around, they're a mighty ornery lot. It's the way they're raised.”
― Mark Twain, The Adventures of Huckleberry Finn
tags: henry-the-eighth, kings
12 likes

Polls voted on by Jamieanne