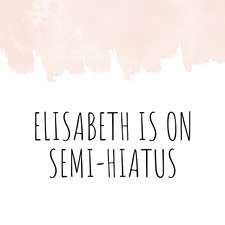 This will prevent Elisabeth from sending you messages, friend request or from viewing your profile. They will not be notified. Comments on discussion boards from them will be hidden by default.
Sign in to Goodreads to learn more about Elisabeth.

Elisabeth Lane is currently reading
You Are a Badass: How to Stop Doubting Your Greatness and Start Living an Awesome Life
by Jen Sincero (Goodreads Author)
bookshelves: currently-reading

See all 6 books that Elisabeth is reading…

Beastly Desires (The Verochka Pride #1) by Nikki Winter
6 notes & 8 highlights
“Kam.” The soft voice and familiar tone drew her away from darkening thoughts. “You’re safe here.” A large, warm palm covered her hand, bringing her to the realization that her claws were out. “You and Cal are safe.”
He's so nice

“Suck my breasts, Barrel,” she instructed. “Cover me with your nanocybotics.” All”
― Cynthia Sax, Jumping Barrel
0 likes

“In the traitor lands, there were sacrifices every new moon, and you were lucky if the lord slit your throat before he gave you to his master. Even in the caves, leaders had cracked. Joan listened to the three girls discuss “character” very seriously and tried not to laugh or roll her eyes. You idiots, she thought. Does it matter where your prince put his hands? There’s no blood on them. Except that they did care because they could. Because they’d never known anyone worse. Tyrants were hazy figures from history. If this was a land, maybe a time, in the summer of its life, these were women in the summer of theirs. Their voices held no desperation, no need to hurry, no real fear. Earnestness, yes, and lots of it, but they gave a damn because they chose to, not because they had to. Even”
― Isabel Cooper, No Proper Lady
0 likes

“It was a curious insight into Vorkosigan that he should so automatically accept her bare word as binding; he evidently thought along the same lines himself. The”
― Lois McMaster Bujold, Shards of Honour
0 likes

“She lifted her chin, trying to be brave, fearing he’d still not want her. All she could do was focus on the middle of his chest. He wore another novelty shirt that had “Now they see the sky and they remember what they are.”
― Melissa Blue, To One Hundred
2 likes

“She was thirty-two years old; it was a Friday night; and she was in a hoodie, eating popcorn and cereal, reading about brain trauma, and hate-watching hockey.”
― Ruby Lang, Hard Knocks
0 likes

Tiffany Reads It All

Laura Kinsale
author of: Flowers from the Storm

Victoria Dahl
author of: Talk Me Down

Romance Leads Who go to Therapy

Polls voted on by Elisabeth