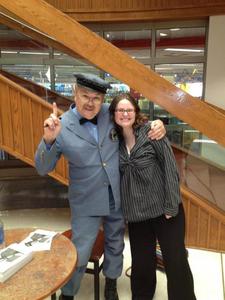 “[F]or just one second, look at your life and see how perfect it is. Stop looking for the next secret door that is going to lead you to your real life. Stop waiting. This is it: there's nothing else. It's here, and you'd better decide to enjoy it or you're going to be miserable wherever you go, for the rest of your life, forever.”
― Lev Grossman, The Magicians
tags: contentment, destiny, happiness, life, misery, perfection, satisfaction, unhappiness
525 likes

“He’d seen unequivocally that the chaos he’d dedicated his life to holding at bay was stronger and wider and more powerful than he would ever be. No compromise he could make would be enough. His death-self was unfolding in him, and the dark blooming took no effort. It was a relief, a relaxation, a long, slow exhale after decades of holding it in.
He was in ruins, but it was okay, because he was dying.”
― James S.A. Corey, Leviathan Wakes
11 likes

“Where should I go?" -Alice. "That depends on where you want to end up." - The Cheshire Cat.”
― Lewis Carroll, Alice's Adventures in Wonderland / Through the Looking-Glass
tags: alice-in-wonderland, books, coming-of-age, lewis-carroll
599 likes

“memories are funny things. Sometimes they’re real, but other times they change into what we want them to be,”
― Nicholas Sparks, The Best of Me
37 likes

Read It Forward — 299 members — last activity Aug 09, 2015 09:09AM
For members of the Read It Forward community and all fans of great fiction and narrative non-fiction. Author chats and more!

MyNextList (former FictFact) Users — 741 members — last activity Oct 17, 2020 06:26AM
MyNextList from the minds of the people behind @fictfact.
More of Emily’s groups…

The Most Comforting Books (The Literary Version of Bread Pudding)