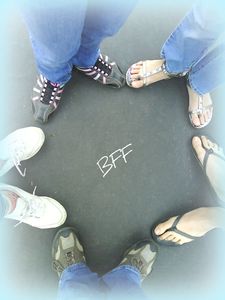 This will prevent Winnie from sending you messages, friend request or from viewing your profile. They will not be notified. Comments on discussion boards from them will be hidden by default.
Sign in to Goodreads to learn more about Winnie.

Winnie said: " It takes a long time to read... the first part is boring "

“East of the sun and west of the moon.' As unfathomable as the words were, I realized I must figure them out, reason it through. For I would go to this impossible land that lay east of the sun and west of the moon. From the moment the sleigh had vanished from sight and I could no longer hear the silver bells I knew that I would go after the stranger that had been the white bear to make right the terrible wrong I had done him.... All that mattered was to make things right. And I would do whatever it took, journey to wherever I must, to reach that goal.”
― Edith Pattou, East
52 likes

“Be who you are and say what you feel, because those who mind don't matter, and those who matter don't mind.”
― Bernard M. Baruch
tags: ataraxy, be-yourself, confidence, fitting-in, individuality, misattributed-dr-seuss, those-who-matter
126640 likes

“East of the sun and west of the moon.”
― Edith Pattou, East
tags: fairy-tale
22 likes

Mrs. Deacon's Awesome Reader's — 16 members — last activity Jul 01, 2010 09:57PM
All of the readers in our classroom getting together to share information about book.

Polls voted on by Winnie