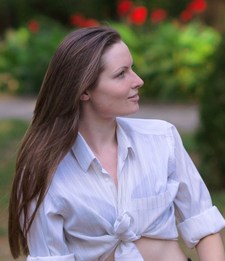 This will prevent Lyubov from sending you messages, friend request or from viewing your profile. They will not be notified. Comments on discussion boards from them will be hidden by default.
Sign in to Goodreads to learn more about Lyubov.

Lyubov Voloshko is currently reading
The Diary of a Young Girl
by Anne Frank
bookshelves: currently-reading

“They all had the politics of horse thieves. He believed in the Republic as a form of government but the Republic would have to get rid of all of that bunch of horse thieves that brought it to the pass it was in when the rebellion started.
Was there ever a people whose leaders were as truly their enemies as
this one?”
― Ernest Hemingway, For Whom the Bell Tolls
2 likes

“By then she's lost in the land of sleep and he is too, and when they go there they never go together, and she is afraid that it is also a preview of death, a place where there may be dreams but never love, never home, never a hand to hold yours when squadrons of birds flock across the burnt-orange sun at the close of the day.”
― Stephen King
0 likes

“The State, that immune betrayer, which embezzles billions and jails anyone who defrauds it of as much as five marks, would find some pretext for not paying.”
― Erich Maria Remarque, The Black Obelisk
1 likes

“I wish I could write well enough to write that story, he thought. What we did. Not what the others did to us.”
― Ernest Hemingway, For Whom the Bell Tolls
tags: truth, war
3 likes

Polls voted on by Lyubov