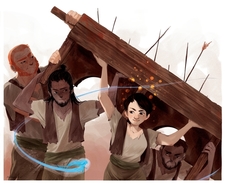 This will prevent TS from sending you messages, friend request or from viewing your profile. They will not be notified. Comments on discussion boards from them will be hidden by default.
Sign in to Goodreads to learn more about TS.

“The Norse myths are the myths of a chilly place, with long, long winter nights and endless summer days, myths of a people who did not entirely trust or even like their gods, although they respected and feared them.”
― Neil Gaiman, Norse Mythology
101 likes

“But what does a mirror know? What can it show us of ourselves? Oh, it might reveal a few scars, and perhaps a glimpse—there, in the eyes—of our true nature. The spirit beneath the skin. Yet the deepest scars are often hidden, and though a mirror might reveal our weakness, it reflects only a fraction of our strength.”
― Nicholas Eames, Kings of the Wyld
tags: mirrors
57 likes

“If you had to shoot a man, society had already failed.”
― Brandon Sanderson, The Bands of Mourning
41 likes

“Among them is a renegade king, he who sired five royal heirs without ever unzipping his pants. A man to whom time has imparted great wisdom and an even greater waistline, whose thoughtless courage is rivalled only by his unquenchable thirst.

At his shoulder walks a sorcerer, a cosmic conversationalist. Enemy of the incurable rot, absent chairman of combustive sciences at the university in Oddsford, and the only living soul above the age of eight to believe in owlbears.

Look here at a warrior born, a scion of power and poverty whose purpose is manifold: to shatter shackles, to murder monarchs, and to demonstrate that even the forces of good must sometimes enlist the service of big, bad motherfuckers. His is an ancient soul destined to die young.

And now comes the quiet one, the gentle giant, he who fights his battles with a shield. Stout as the tree that counts its age in aeons, constant as the star that marks true north and shines most brightly on the darkest nights.

A step ahead of these four: our hero. He is the candle burnt down to the stump, the cutting blade grown dull with overuse. But see now the spark in his stride. Behold the glint of steel in his gaze. Who dares to stand between a man such as this and that which he holds dear? He will kill, if he must, to protect it. He will die, if that is what it takes.

“Go get the boss,” says one guardsman to another. “This bunch looks like trouble.”

And they do. They do look like trouble, at least until the wizard trips on the hem of his robe. He stumbles, cursing, and fouls the steps of the others as he falls face-first onto the mud-slick hillside.”
― Nicholas Eames, Kings of the Wyld

“Money is meaningless.” Waxillium perked up. “What?” “Only expectation has value as currency, Waxillium,” Uncle Edwarn said. “This coin is worth more than the others because people think it is. They expect it to be. The most important things in the world are worth only what people will pay for them. If you can raise someone’s expectation … if you can make them need something … that is the source of wealth. Owning things of value is secondary to creating things of value where none once existed.”
― Brandon Sanderson, Shadows of Self
23 likes

Steven Erikson
author of: Gardens of the Moon

Will Wight
author of: Unsouled
More…

Polls voted on by TS