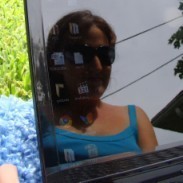 This will prevent Cristina from sending you messages, friend request or from viewing your profile. They will not be notified. Comments on discussion boards from them will be hidden by default.
Sign in to Goodreads to learn more about Cristina.

See all 4 books that Cristina is reading…

“When I am dead, I hope it may be said: "His sins were scarlet, but his books were read.”
― Hilaire Belloc
1735 likes

“It's always a matter, isn't it, of waiting for the world to come unraveled? When things hold together, it's always only temporary.”
― Rebecca Makkai, The Great Believers
36 likes

“But when someone’s gone and you’re the primary keeper of his memory—letting go would be a kind of murder, wouldn’t it? I had so much love for him, even if it was a complicated love, and where is all that love supposed to go? He was gone, so it couldn’t change, it couldn’t turn to indifference. I was stuck with all that love.”
― Rebecca Makkai, The Great Believers
36 likes

“An Urban Indian belongs to the city, and cities belong to the earth. Everything here is formed in relation to every other living and nonliving thing from the earth. All our relations. The process that brings anything to its current form—chemical, synthetic, technological, or otherwise—doesn’t make the product not a product of the living earth. Buildings, freeways, cars—are these not of the earth? Were they shipped in from Mars, the moon? Is it because they’re processed, manufactured, or that we handle them? Are we so different? Were we at one time not something else entirely, Homo sapiens, single-celled organisms, space dust, unidentifiable pre-bang quantum theory? Cities form in the same way as galaxies.”
― Tommy Orange, There There
14 likes

“Some of you say, “Joy is greater than sorrow,” and others say, “Nay, sorrow is the greater.”
But I say unto you, they are inseparable.
Together they come, and when one sits alone with you at your board, remember that the other is asleep upon your bed.”
― Kahlil Gibran, The Prophet

r/ravenclaw — 20 members — last activity Jan 28, 2014 03:10PM
A place for the Ravenclaws of Reddit to share book reviews and recommendations, because Madam Pince keeps kicking us out for whispering.

"The Overstory" Bibliography by Richard Powers

Polls voted on by Cristina