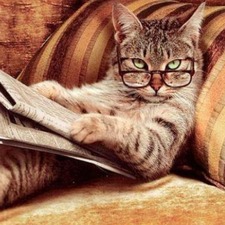 This will prevent Katherine from sending you messages, friend request or from viewing your profile. They will not be notified. Comments on discussion boards from them will be hidden by default.
Sign in to Goodreads to learn more about Katherine.

Katherine Coble is currently reading
Chasing the Scream: The First and Last Days of the War on Drugs
by Johann Hari
bookshelves: currently-reading

Katherine Coble is currently reading
The Fire and the Ore
by Olivia Hawker
bookshelves: currently-reading

See all 266 books that Katherine is reading…

Paladin of Souls (World of the Five Gods, #2) by Lois McMaster Bujold
6 notes & 8 highlights
All her old thoughts seemed as thin and ragged as a piece of knitting made and ripped out and made and ripped out again until all the threads were frayed, growing ever more worn, but never larger.
i swear i love this book already
See Katherine Coble’s 9 books with notes and highlights…

“by the time life gets smart enough to leave its planet, it’s too smart to want to go. Because it knows it won’t work. So it stays home. It enjoys its home. As why wouldn’t you?”
― Kim Stanley Robinson, Aurora
0 likes

“God’s work, then, and whether God existed or not, he would act as if He did, on faith, for he could deduce no other reason in the end for man’s existence.”
― Robin Oliveira, My Name is Mary Sutter
0 likes

“English medieval history is impossible to understand without France, which exerted a huge cultural influence over its northern neighbor well into the modern era, and so the story of the Seven Kingdoms is not just that of England but rather Britain, France, and Spain in one. In Martin’s words, “Westeros is much much MUCH bigger than Britain. More the size (though not the shape, obviously) of South America.”9 Although the Seven Kingdoms all speak the same language, they are varied in their ancestry and racial appearance, while the geography varies hugely; so, while the five most northerly kingdoms correspond to Britain, the Reach strongly resembles France and Dorne is Moorish Spain. Paris is the model for King’s Landing, and in the books appears far less tropical than in the television series, which is filmed in Malta and Croatia.10”
― Ed West, Iron, Fire and Ice: The real history behind Game of Thrones
0 likes

“Seventy percent of your tendency to gain weight is determined by your parentage. Obesity is overwhelmingly inherited.”
― Jason Fung, The Obesity Code: Unlocking the Secrets of Weight Loss
0 likes

“Everyone had a copy of his new book, I Told You I Would.”
― Stephen King, The Outsider
0 likes

GirlWithThePinkSkiMask WAAY BEHIND & CATCHING UP!!

Historical Gems from the Past

Polls voted on by Katherine