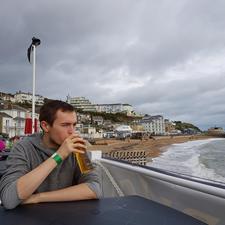 This will prevent Jake from sending you messages, friend request or from viewing your profile. They will not be notified. Comments on discussion boards from them will be hidden by default.
Sign in to Goodreads to learn more about Jake.

Jake Lee is currently reading
Erebus: The Story of a Ship
by Michael Palin
bookshelves: own, currently-reading

“The gotta, as in: “I think I’ll stay up another fifteen-twenty minutes, honey, I gotta see how this chapter comes out.” Even though the guy who says it spent the day at work thinking about getting laid and knows the odds are good his wife is going to be asleep when he finally gets up to the bedroom. The gotta, as in: “I know I should be starting supper now — he’ll be mad if it’s TV dinners again — but I gotta see how this ends.” I gotta know will she live. I gotta know will he catch the shitheel who killed his father. I gotta know if she finds out her best friend’s screwing her husband. The gotta. Nasty as a hand-job in a sleazy bar, fine as a fuck from the world’s most talented call-girl. Oh boy it was bad and oh boy it was good and oh boy in the end it didn’t matter how rude it was or how crude it was because in the end it was just like the Jacksons said on that record — don’t stop til you get enough.”
― Stephen King, Misery
tags: inspiration, writing, writing-process
22 likes

“What he realised, and more clearly as time went on, was that money-worship has been elevated into a religion. Perhaps it is the only real religion-the only felt religion-that is left to us. Money is what God used to be. Good and evil have no meaning any longer except failure and success. Hence the profoundly significant phrase, to make good. The decalogue has been reduced to two commandments. One for the employers-the elect, the money priesthood as it were- 'Thou shalt make money'; the other for the employed- the slaves and underlings'- 'Thou shalt not lose thy job.' It was about this time that he came across The Ragged Trousered Philanthropists and read about the starving carpenter who pawns everything but sticks to his aspidistra. The aspidistra became a sort of symbol for Gordon after that. The aspidistra, the flower of England! It ought to be on our coat of arms instead of the lion and the unicorn. There will be no revolution in England while there are aspidistras in the windows.”
― George Orwell, Keep the Aspidistra Flying
tags: control, money, religion, revolution, symbolic
34 likes

Polls voted on by Jake