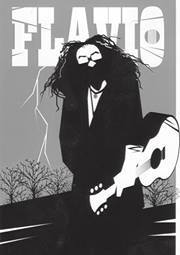 This will prevent Flavio from sending you messages, friend request or from viewing your profile. They will not be notified. Comments on discussion boards from them will be hidden by default.
Sign in to Goodreads to learn more about Flavio.

See all 13 books that Flavio is reading…

“Crowley had always known that he would be around when the world ended, because he was immortal and wouldn’t have any alternative. But he hoped it was a long way off. Because he rather liked people. It was major failing in a demon. Oh, he did his best to make their short lives miserable, because that was his job, but nothing he could think up was half as bad as the stuff they thought up themselves. They seemed to have a talent for it. It was built into the design, somehow. They were born into a world that was against them in a thousand little ways, and then devoted most of their energies to making it worse. Over the years Crowley had found it increasingly difficult to find anything demonic to do which showed up against the natural background of generalized nastiness. There had been times, over the past millennium, when he’d felt like sending a message back Below saying, Look we may as well give up right now, we might as well shut down Dis and Pandemonium and everywhere and move up here, there’s nothing we can do to them that they don’t do to themselves and they do things we’ve never even thought of, often involving electrodes. They’ve got what we lack. They’ve got imagination. And electricity, of course. One of them had written it, hadn’t he…”Hell is empty, and all the devils are here.”
― Terry Pratchett, Good Omens: The Nice and Accurate Prophecies of Agnes Nutter, Witch
344 likes

“...But they had, perversely, been living among people who were peering into the wrong end of the telescope, or something, and who had convinced themselves that the opposite was true - that the world had once been a splendid, orderly place...and that everything had been slowly, relentlessly falling apart ever since.”
― Neal Stephenson, Quicksilver
26 likes

Polls voted on by Flavio