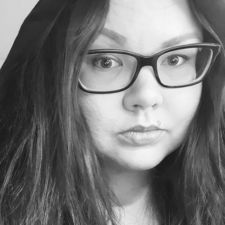 This will prevent Jenna from sending you messages, friend request or from viewing your profile. They will not be notified. Comments on discussion boards from them will be hidden by default.
Sign in to Goodreads to learn more about Jenna.

See all 4 books that Jenna is reading…

“And now, all these years later, it seemed to him that the most horrible fact of human existence was that broken hearts mended.”
― Stephen King, Wizard and Glass
tags: humanity, love
136 likes

“If it's ka it'll come like a wind, and your plans will stand before it no more than a barn before a cyclone”
― Stephen King, Wizard and Glass
tags: cyclone, fate, ka, love, roland, stephen-king, susan, susan-delgado, wind, wizard-and-glass
171 likes

“I.
My first thought was, he lied in every word,
That hoary cripple, with malicious eye
Askance to watch the workings of his lie
On mine, and mouth scarce able to afford
Suppression of the glee, that pursed and scored
Its edge, at one more victim gained thereby.

II.
What else should he be set for, with his staff?
What, save to waylay with his lies, ensnare
All travellers who might find him posted there,
And ask the road? I guessed what skull-like laugh
Would break, what crutch 'gin write my epitaph
For pastime in the dusty thoroughfare.

III.
If at his counsel I should turn aside
Into that ominous tract which, all agree,
Hides the Dark Tower. Yet acquiescingly
I did turn as he pointed, neither pride
Now hope rekindling at the end descried,
So much as gladness that some end might be.

IV.
For, what with my whole world-wide wandering,
What with my search drawn out through years, my hope
Dwindled into a ghost not fit to cope
With that obstreperous joy success would bring,
I hardly tried now to rebuke the spring
My heart made, finding failure in its scope.

V.
As when a sick man very near to death
Seems dead indeed, and feels begin and end
The tears and takes the farewell of each friend,
And hears one bit the other go, draw breath
Freelier outside, ('since all is o'er,' he saith
And the blow fallen no grieving can amend;')

VI.
When some discuss if near the other graves
be room enough for this, and when a day
Suits best for carrying the corpse away,
With care about the banners, scarves and staves
And still the man hears all, and only craves
He may not shame such tender love and stay.

VII.
Thus, I had so long suffered in this quest,
Heard failure prophesied so oft, been writ
So many times among 'The Band' to wit,
The knights who to the Dark Tower's search addressed
Their steps - that just to fail as they, seemed best,
And all the doubt was now - should I be fit?

VIII.
So, quiet as despair I turned from him,
That hateful cripple, out of his highway
Into the path he pointed. All the day
Had been a dreary one at best, and dim
Was settling to its close, yet shot one grim
Red leer to see the plain catch its estray.

IX.
For mark! No sooner was I fairly found
Pledged to the plain, after a pace or two,
Than, pausing to throw backwards a last view
O'er the safe road, 'twas gone; grey plain all round;
Nothing but plain to the horizon's bound.
I might go on, naught else remained to do.

X.
So on I went. I think I never saw
Such starved ignoble nature; nothing throve:
For flowers - as well expect a cedar grove!
But cockle, spurge, according to their law
Might propagate their kind with none to awe,
You'd think; a burr had been a treasure trove.

XI.
No! penury, inertness and grimace,
In some strange sort, were the land's portion. 'See
Or shut your eyes,' said Nature peevishly,
It nothing skills: I cannot help my case:
Tis the Last Judgement's fire must cure this place
Calcine its clods and set my prisoners free.”
― Robert Browning
tags: first-part
27 likes

Warsan Shire
author of: Teaching My Mother How to Give Birth

Donna Tartt
author of: The Goldfinch

Polls voted on by Jenna