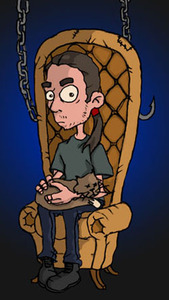 This will prevent Vasil from sending you messages, friend request or from viewing your profile. They will not be notified. Comments on discussion boards from them will be hidden by default.
Sign in to Goodreads to learn more about Vasil.

Vasil Kolev is currently reading
Seeing Like a State: How Certain Schemes to Improve the Human Condition Have Failed
by James C. Scott
bookshelves: currently-reading

See all 4 books that Vasil is reading…

“You learn to appreciate the fact that what drives you is very different from what you’re told should make you happy. You learn that it’s okay to prefer your personal idea of heaven (live-tweeting zombie movies from under a blanket of kittens) rather than someone else’s idea that fame/fortune/parties are the pinnacle we should all reach for. And there’s something surprisingly freeing about that.”
― Jenny Lawson, Furiously Happy: A Funny Book About Horrible Things
36 likes

“Karsa shrugged. ‘The Malazan soldiers in Genabaris said the Seven Cities was going to rebel against their occupiers. This is why the Teblor do not make conquests. Better that the enemy keeps its land, so that we may raid again and again.’

‘Not the imperial way,’ the Daru responded, shaking his head. ‘Possession and control, the two are like insatiable hungers for some people. Oh, no doubt the Malazans have thought up countless justifications for their wars of expansion. It’s well known that Seven Cities was a rat’s warren of feuds and civil wars, leaving most of the population suffering and miserable and starving under the heels of fat warlords and corrupt priest-kings. And that, with the Malazan conquest, the thugs ended up spiked to the city walls or on the run. And the wilder tribes no longer sweep down out of the hills to deliver mayhem on their more civilized kin. And the tyranny of the priesthoods was shattered, putting an end to human sacrifice and extortion. And of course the merchants have never been richer, or safer on these roads. So, all in all, this land is rife for rebellion.”
― Steven Erikson, House of Chains

“As the years go by, it has become increasingly apparent to me that legislatively reforming the surveillance regime of the country of my birth won't necessarily help a journalist or dissident in the country of my exile, but an encrypted smartphone miht.”
― Edward Snowden, Permanent Record
0 likes

“Ditto for the stereotype about men monopolizing conversations. Like Sasha, many of my dates—even the more passive ones—did most of the talking. I listened to them talk literally for hours about the most minute, mind-numbing details of their personal lives; men they were still in love with, men they had divorced, roommates and coworkers they hated, childhoods they were loath to remember, yet somehow found the energy to recount ad nauseam. Listening to them was like undergoing a slow frontal lobotomy. I sat there stunned by the social ineptitude of people to whom it never seemed to occur that no one, much less a first date, would have any interest in enduring this ordeal.”
― Norah Vincent, Self-Made Man: One Woman's Journey Into Manhood and Back Again
tags: women
2 likes

“Fire-priests have an uncomplicated theology; immolating people purifies them from sin, so the more people you burn to death the less sin there is in the world, and the more holy you are for doing it”
― Graydon Saunders, The March North
3 likes

Steven Erikson
author of: Gardens of the Moon
More…

Polls voted on by Vasil