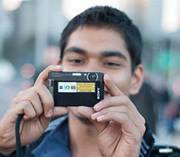 This will prevent Diwank Singh Tomer from sending you messages, friend request or from viewing your profile. They will not be notified. Comments on discussion boards from them will be hidden by default.
Sign in to Goodreads to learn more about Diwank Singh Tomer.

“Do you wish me a good morning, or mean that it is a good morning whether I want it or not; or that you feel good this morning; or that it is a morning to be good on?”
― J.R.R. Tolkien, The Hobbit, or There and Back Again
tags: humor, semantics, suspicion
3997 likes

“Alive without breath,
As cold as death;
Never thirsty, ever drinking,
All in mail never clinking.”
― J.R.R. Tolkien, The Hobbit, or There and Back Again

“He realized now that to be afraid of this death he was staring at with animal terror meant to be afraid of life. Fear of dying justified a limitless attachment to what is alive in man. And all those who had not made the gestures necessary to live their lives, all those who feared and exalted impotence— they were afraid of death because of the sanction it gave to a life in which they had not been involved. They had not lived enough, never having lived at all. And death was a kind of gesture, forever withholding water from the traveler vainly seeking to slake his thirst. But for the others, it was the fatal and tender gesture that erases and denies, smiling at gratitude as at rebellion.”
― Albert Camus, A Happy Death
tags: a-happy-death, albert-camus
30 likes

“It was at this point that Bilbo stopped. Going on from there was the bravest thing he ever did. The tremendous things that happened afterward were as nothing compared to it. He fought the real battle in the tunnel alone, before he ever saw the vast danger that lay in wait.”
― J.R.R. Tolkien, The Hobbit, or There and Back Again
252 likes

The Most Begun "Read but Unfinished" (Initiated) book ever