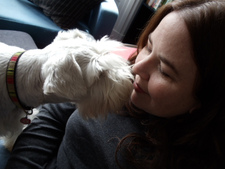 This will prevent Laurie from sending you messages, friend request or from viewing your profile. They will not be notified. Comments on discussion boards from them will be hidden by default.
Sign in to Goodreads to learn more about Laurie.

See all 5 books that Laurie is reading…

“Women's liberationists, white and black, will always be at odds with one another as long as our idea of liberation is based on having the power white men have. For that power denies unity, denies common connections, and is inherently divisive.”
― bell hooks
tags: connection, feminism, liberation, power, racism, unity
4 likes

“The essence of economic inequality is borne out in a simple fact: there are 400 billionaires in the United States and 45 million people living in poverty. These are not parallel facts; they are intersecting facts. There are 400 American billionaires because there are 45 million people living in poverty. Profit comes at the expense of the living wage. Corporate executives, university presidents, and capitalists in general are living the good life--because so many others are living a life of hardship.”
― Keeanga-Yamahtta Taylor, From #BlackLivesMatter to Black Liberation
tags: blacklivesmatter, living-wage, poverty, social-justice
4 likes

“Imagine if Reconstruction had actually honored the citizenship of four million freedpeople—provided the education, political autonomy, and economic wherewithal warranted by their and their ancestors’ hundreds of years of free labor. If, instead of continually re-fighting the Civil War, we had actually moved on to rebuilding a strong, viable South, a South where poor whites, too—for they had been left out as well—could gain access to proper education. Imagine”
― Carol Anderson, White Rage: The Unspoken Truth of Our Racial Divide
18 likes

“Mahler put the word schwer beside certain passages in his musical scores. Meaning “difficult.” “Heavy.” We were told this at some point by The Moth, as if it was a warning. He said we needed to prepare for such moments in order to deal with them efficiently, in case we suddenly had to take control of our wits. Those times exist for all of us, he kept saying. Just as no score relies on only one pitch or level of effort from musicians in the orchestra. Sometimes it relies on silence. It was a strange warning to be given, to accept that nothing was safe anymore. “ ‘Schwer,’ ” he’d say, with his fingers gesturing the inverted commas, and we’d mouth the word and then the translation, or simply nod in weary recognition. My sister and I got used to parroting the word back to each other—“schwer.”
― Michael Ondaatje, Warlight
26 likes

“What if we measure the radicalism of speech by how radically it transforms open-minded people, by how the speech liberates the antiracist power within? What if we measure the conservatism of speech by how intensely it keeps people the same, keeps people enslaved by their racist ideas and fears, conserving their inequitable society?”
― Ibram X. Kendi, How to Be an Antiracist
tags: antiracist, equity, liberation, speech
1 likes

Women Around the World

Polls voted on by Laurie