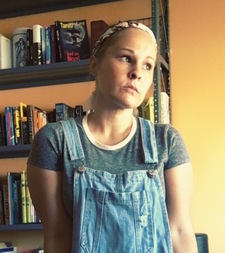 This will prevent Sara from sending you messages, friend request or from viewing your profile. They will not be notified. Comments on discussion boards from them will be hidden by default.
Sign in to Goodreads to learn more about Sara.

“In the jumbled, fragmented memories I carry from my childhood there are probably nearly as many dreams as images from waking life. I thought of one which might have been my earliest remembered nightmare. I was probably about four years old - I don't think I'd started school yet - when I woke up screaming. The image I retained of the dream, the thing which had frightened me so, was an ugly, clown-like doll made of soft red and cream-coloured rubber. When you squeezed it, bulbous eyes popped out on stalks and the mouth opened in a gaping scream. As I recall it now, it was disturbingly ugly, not really an appropriate toy for a very young child, but it had been mine when I was younger, at least until I'd bitten its nose off, at which point it had been taken away from me. At the time when I had the dream I hadn't seen it for a year or more - I don't think I consciously remembered it until its sudden looming appearance in a dream had frightened me awake.

When I told my mother about the dream, she was puzzled.

'But what's scary about that? You were never scared of that doll.'

My mother looked at me, baffled. 'But it's not scary,' she said gently. I'm sure she was trying to make me feel better, and thought this reasonable statement would help. She was absolutely amazed when it had the opposite result, and I burst into tears.

Of course she had no idea why, and of course I couldn't explain. Now I think - and of course I could be wrong - that what upset me was that I'd just realized that my mother and I were separate people. We didn't share the same dreams or nightmares. I was alone in the universe, like everybody else. In some confused way, that was what the doll had been telling me. Once it had loved me enough to let me eat its nose; now it would make me wake up screaming. ("My Death")”
― Lisa Tuttle, Best New Horror 16

“Love doesn't just sit there, like a stone, it has to be made, like bread; remade all the time, made new.”
― Ursula K. Le Guin, The Lathe of Heaven
tags: love
6331 likes

Polls voted on by Sara