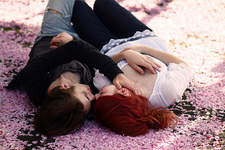 This will prevent Megan (magan bagan) from sending you messages, friend request or from viewing your profile. They will not be notified. Comments on discussion boards from them will be hidden by default.
Sign in to Goodreads to learn more about Megan (magan bagan).

“Darkness cannot drive out darkness: only light can do that. Hate cannot drive out hate: only love can do that.”
― Martin Luther King Jr., A Testament of Hope: The Essential Writings and Speeches
tags: darkness, drive-out, hate, inspirational, light, love, peace
74700 likes

“Bet you can't even name one romantic movie you like," she teased.
She felt smug when a few minutes went by and Oliver was still unable to name one romantic movie he could profess to enjoy.
The Empire Strikes Back," Oliver finally declared, tapping his horn at a Prius that wandered over the line.
The Empire Strikes Back? The Star Wars movie? That's not romantic!" Schuyler huffed, fiddling with the air conditioner controls.
Au contraire, my dear, it's very romantic. The last scene, you know, when they're about to put Han in that freezing cryogenic chamber or whatever? Remember?"
Schuyler mmm-hmmmed.
And Leia leans over the ledge and says, 'I love you.'"
That's cheesy, not romatic," Schuyler argued, although she did like that part.
Let me explain. What's romantic is what Han says back. Remember what he says to her? After she says 'I love you'?"
Schuyler grinned. Maybe Oliver had a point. "Han says, 'I know.'"
Exactly," Oliver tapped the wheel. "He doesn't have to say anything so trite as 'I love you." Because that's already understood. And that's romantic.”
― Melissa de la Cruz, Revelations

“You're right though. I should have discussed my plan with you. I'm sorry. From now on, I promise I will consult with you before I do anything you don't expect. Is that exceptable?' (Eragon)
Only if it involves weapons, magic, kings, or family members.' (Saphira)
Or flowers.' (Eragon)
Or flowers. I don't need to know if you decide to eat some bread and cheese in the middle of the night.' (Saphira)
Unless a man with a very long knife is waiting for me outside of my tent.'(Eragon)
If you could not defeat a single man with a very long knife, you would be a poor excuse for a Rider indeed.' (Saphira)”
― Christopher Paolini

“Nature's first green is gold,
Her hardest hue to hold.
Her early leaf's a flower;
But only so an hour.
Then leaf subsides to leaf.
So Eden sank to grief,
So dawn goes down to day.
Nothing gold can stay.”
― Robert Frost

Once Upon a Twilight blog — 582 members — last activity Feb 16, 2016 11:53AM
Everything and anything concerning books! Review, Trailers, Interviews, You name it we will have it.

Light Series — 160 members — last activity Sep 24, 2014 01:40PM
Use this venue to start discussions about the novels in the Light Series, speculate and share information regarding the Seers world.