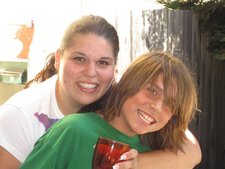 This will prevent ஐAndreaஐ from sending you messages, friend request or from viewing your profile. They will not be notified. Comments on discussion boards from them will be hidden by default.
Sign in to Goodreads to learn more about ஐAndreaஐ.

“You’ve given some pretty convincing arguments, but you’re still a long way from winning me over.”

“I haven’t even really tried,” he said, in a rare moment of arrogance. “When I want to, I can be very persuasive.”

His lips moved toward mine. “I was hoping you’d say that.”
― Richelle Mead, Foretold: 14 Tales of Prophecy and Prediction

“You probably love to tell kids to get off your lawn, too.”
― Jeaniene Frost, Once Burned
tags: humor, leila
38 likes

“I can give you honesty, monogamy, and more passion than you can stand, but not love. That emotion died in me long ago, as I suspect you already know.”
I took a deep breath, fighting a twinge that made no sense because he was right. I had guessed that about him.
“Good,” I replied in a steady voice. “I was worried that you’d turn into one of those obsessed, emo movie vampires, and that would be embarrassing for both of us.”
His laughter rang out before changing into something rougher and infinitely more sensual. Emerald overtook his gaze once again.
“Enough talk,” he muttered, and lowered his head.”
― Jeaniene Frost, Once Burned
tags: vlad
46 likes

“I stretched out my hands as if to ward him off. “Not yet. I want to know what your end game is first.”
Another flash of teeth, this time showing his fangs.
“To have you screaming my name within the hour.”
― Jeaniene Frost, Once Burned
tags: vlad
101 likes

“You have visitors," Maximus stated.
...
"Stop"
I did at his commanding tone, and then cursed. I wasn't one of his employees-he had no right to order me around.
"No," I said defiantly. "I'm sweaty snd bloody and I want to take a shower, so whatever you have to say, it can wait."
Maximus lost his impassive expression an looked at me as if I'd suddenly sproute a second head. Vlad's brows drew together and he opened his mouth, but before he could speak, laughter rang out from the hallway.
"I simply must meet whoever has out you in your place so thoroughly, Tepesh," an unfamiliar British voice stated.
"Did I mention they were on their way down," Maximus muttered.”
― Jeaniene Frost, Once Burned
58 likes

Polls voted on by ஐAndreaஐ