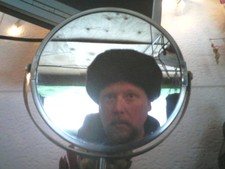 This will prevent Chuck from sending you messages, friend request or from viewing your profile. They will not be notified. Comments on discussion boards from them will be hidden by default.
Sign in to Goodreads to learn more about Chuck.

“May your course not run from one end to the other; for such a course does not exist; but may every step you take mark a redressed projection.
With your left foot you shall wipe out the footprint of your right foot.”
― Marcel Schwob, El libro de Monelle
tags: symbolist
15 likes

“Goodness preaches constantly, wants to change humanity, to work miracles from one day to the next, makes a show of its substance, wants to question essentials, but in fact is most often just hollow, lacking in substance, essence itself. A good word which has not yet been put into practice holds within itself every virgin possibility and is more than a good deed, the outcome of which is dubious, its effect arguable. In general words are always more than deeds.”
― Deszo Koszstolanyi
tags: goodness
1 likes

“Perhaps the past doesn't always preserve the beautiful order that clocks give to the present, and perhaps the future is rushing up in disorder, each moment tripping over itself, to be the first to slice itself up.”
― Raymond Quaneau
0 likes

“Why frighten little children with the dark when one can quiet them with it and lead them into dreams?”
― Sigizmund Krzhizhanovsky, Autobiography of a Corpse
12 likes

Tibor Déry
author of: Niki: The Story of a Dog

Bruno Schulz
author of: The Street of Crocodiles

Polls voted on by Chuck