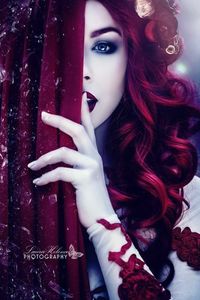 This will prevent Kat from sending you messages, friend request or from viewing your profile. They will not be notified. Comments on discussion boards from them will be hidden by default.
Sign in to Goodreads to learn more about Kat.

“I did actually want to ask you something,” he whispered, shifting around so he was on top of her. “Hmmm, and what was that?” she asked, tilting her head back so he could kiss her exposed neck. “I want to know,” he breathed, his tongue moving between her breasts. “When do we get to be bad again?” She smiled big. “Baby, I thought you'd never ask.”
― Stylo Fantome, The Bad Ones
2 likes

“He pauses at my first button and searches my face. Touching him was never a part of the deal, and he must be wondering why I’m doing it willingly. I don’t know if he hates or loves it, but I don’t give him or myself time to think about it. I lift my knee and hit him in the crotch. Hard. As hard as I can. His face contorts and his hands shoot out for me, but I duck and run past him. A huge grin pulls on my face. I just kneed Aiden fucking King in the balls!”
― Rina Kent, Deviant King
13 likes

“Ella?” Cinder asked when things got quiet. “Are you there?” He sounded hesitant. “Welcome to my life,” I said with a sigh of defeat. “Sorry about that.” “It’s okay.” It was definitely not okay. I was so humiliated. It was a miracle I wasn’t crying. I think that was only because I was still in so much shock. “Look, thanks for giving me your phone number, but maybe this is a bad time.” My dad scrambled to his feet, waving his hands at me. “No! You don’t have to end your call. We’ll give you some privacy.” He glanced at both Jennifer and Juliette. “Won’t we, ladies?” His blatant desperation for me to talk to someone—even a stranger from the Internet—was as embarrassing as Anastasia’s outburst. Even worse, Jennifer was just as bad. “Of course! You go ahead and talk to your boyfriend, Ella,” she squealed. “We can keep an eye on you from the kitchen. I have to get dinner started anyway.” While I was busy dying from her use of the word boyfriend, she hopped off the elliptical. She hurried to catch up to my dad, seeming more than happy to finish her workout early. As they started up the steps, they both turned back to Juliette, who had sprawled out on the couch instead of getting up. “I was here first,” Juliette said in response to their expectant looks. “There’s no way I’m going anywhere near the upstairs with Ana in the mood she’s in, and I really don’t care about Ella’s love life. Besides, she’s not supposed to be alone, anyway. What if she tries to throw herself off the balcony or something?” Was there anyone in the world that didn’t feel the need to humiliate me? I glared at Juliette, and she just waved a pair of earbuds at me and shoved them in her ears. “I’ll turn the volume up.” My dad and Jennifer both gave me such hopeful looks that I couldn’t argue anymore. I rolled my eyes and made my way over to the armchair my father had been lounging in. Once Dad and Jennifer were gone, I glanced over at the couch. Juliette was already doing what she did best—ignoring me. She was bobbing her head along with her music as she read out of a textbook. I doubted she could hear me, but I spoke softly anyway, just in case. “Cinder? Are you still there?” “I didn’t realize upping our relationship to phone buddies would come with a boyfriend title. Does that mean if we ever meet in person, we’ll have to get married?” Surprised, I burst into laughter. Juliette glanced at me with one raised eyebrow, but went back to her textbook without saying anything.”
― Kelly Oram, Cinder & Ella
4 likes

“Were those pictures really for an art project?” Con asked when they were well away from the office. She turned to take the pieces of her broken camera back from him. “Yeah,” she replied, shoving the bits into her bag. “Are they gone forever?” “No, the memory card should be fine.” “Got any other cameras like that one?” “Nope, that was it.” There was an awkward silence. Well, Dulcie felt awkward. Con looked completely at ease. She was beginning to wonder if anything made him uncomfortable. “Thanks for the help,” he finally said. She shrugged. “You're welcome. Can I ask a question?” “Go for it.” “Why did you set someone's car on fire?” She thought maybe it would rattle him – her thinking he'd actually done it. But of course it didn't. He chuckled, and she was treated to a patented Masters grin. It started at one corner of his mouth and eventually moved to the opposite corner, slowly revealing perfect white teeth and a razor sharp smile. He leaned close to her, and as his lips pressed against her ear, she could've sworn the temperature dropped. “Because I thought it would be fun.”
― Stylo Fantome, The Bad Ones
1 likes

“looked beneath my eyelashes at Maxon and smiled. He slowly smiled back, and whispered something to the little boy, who immediately turned and ran away. He reached up and tugged his ear. And I did the same.”
― Kiera Cass, The Selection
2 likes

The #JustTheTip Readership — 327 members — last activity Jan 03, 2018 01:05PM
This group is dedicated to Author Mandi Beck and her books! Join us to keep up to date on what she has planned for you!

Lori Foster
author of: When You Dare

Beauty and the Beast

Polls voted on by Kat