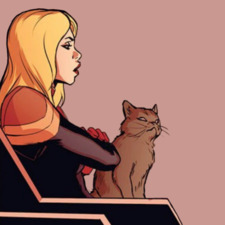 This will prevent kynndra-jo from sending you messages, friend request or from viewing your profile. They will not be notified. Comments on discussion boards from them will be hidden by default.
Sign in to Goodreads to learn more about kynndra-jo.

kynndra-jo is currently reading
Fade (In the Company of Shadows, #4)
by Ais (Goodreads Author)
bookshelves: currently-reading

“I haven't done anything, except be born.”
― David Estes, The Moon Dwellers
11 likes

“Noah was no longer at my side when I turned. He had Kent from algebra pinned against the car. "I should injure you considerably," he said in a low voice
"Dude, chill." Kent was completely calm.
"Noah," I heard myself say. "Its not worth it."
Noah's eyes narrowed, but apon hearing my voice, he released Kent who straightened his shirt and brushed the front of his khakis.
"Get fucked, Kent," Noah said as he turned away.
The idiot laughed, "Oh, I will."
Noah whirled around and I heard the unmistakable impact of knuckles meeting face. Kent was on the concrete, his hands clutching his nose. When he started to get up, Noah said, "I wouldn't. I'm barely above kicking the shit out of you on the ground. Barely."
"You broke my nose!" Blood streamed down Kents shirt and a crowd formed a small circle around the three of us. A teacher parted the throng and called out, "Principals office NOW, Shaw."
Noah ignored him and walked over to me, inordinately calm. He placed his good hand on the small of my back and my legs threatened to dissolve. The bell rang and I looked at Noah as he leaned in and brushed his lips against my ear.
He whispered into my hair, "It was worth it." - The Unbecoming Of Mara Dyer”
― Michelle Hodkin

“I suppose a fire that burns that bright is not meant to last.”
― Veronica Roth, Allegiant
tags: four, heartbreaking, tobias
3346 likes

“The beauty of physical pain is that it wipes out the other forms of pain.”
― David Estes, The Moon Dwellers
15 likes

“How arrogant we are, Adam thought, to deliver babies who can't walk or talk or feed themselves. How sure we are that nothing will destroy them before they can take care of themselves. How fragile they were, how easily abandoned and neglected and beaten and hated. Prey animals were born afraid.”
― Maggie Stiefvater, Blue Lily, Lily Blue
tags: adam-parrish
102 likes

Michelle Hodkin
author of: The Unbecoming of Mara Dyer

Books That Better Be Made Into A Movie

Polls voted on by kynndra-jo