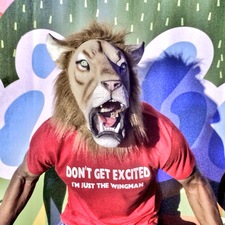 This will prevent Daliso from sending you messages, friend request or from viewing your profile. They will not be notified. Comments on discussion boards from them will be hidden by default.
Sign in to Goodreads to learn more about Daliso.

Daliso Ngoma is currently reading
The Model Thinker: What You Need to Know to Make Data Work for You
by Scott E. Page
bookshelves: currently-reading

Tools of Titans: The Tactics, Routines, and Habits of Billionaires, Icons, and World-Class Performers by Timothy Ferriss
1 note & 7 highlights
“Judge a man by his questions rather than his answers.” —Pierre-Marc-Gaston

“It takes courage to grow up and become who you really are.”
― E.E. Cummings
tags: attributed-no-source, courage
17061 likes

“When you have exhausted all possibilities, remember this - you haven't.”
― Thomas Edison
tags: inspirational, wise-words
545 likes

“One evening Milarepa returned to his cave after gathering firewood, only to find it filled with demons. They were cooking his food, reading his books, sleeping in his bed. They had taken over the joint. He knew about nonduality of self and other, but he still didn’t quite know how to get these guys out of his cave. Even though he had the sense that they were just a projection of his own mind—all the unwanted parts of himself—he didn’t know how to get rid of them. So first he taught them the dharma. He sat on this seat that was higher than they were and said things to them about how we are all one. He talked about compassion and shunyata and how poison is medicine. Nothing happened. The demons were still there. Then he lost his patience and got angry and ran at them. They just laughed at him. Finally, he gave up and just sat down on the floor, saying, “I’m not going away and it looks like you’re not either, so let’s just live here together.” At that point, all of them left except one. Milarepa said, “Oh, this one is particularly vicious.” (We all know that one. Sometimes we have lots of them like that. Sometimes we feel that’s all we’ve got.) He didn’t know what to do, so he surrendered himself even further. He walked over and put himself right into the mouth of the demon and said, “Just eat me up if you want to.” Then that demon left too.”
― Pema Chödrön, Start Where You Are: A Guide to Compassionate Living
tags: buddhism, compassion, meditation, tonglen
54 likes

Polls voted on by Daliso