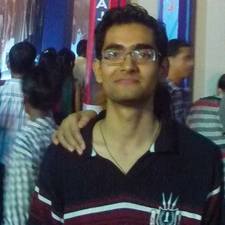 This will prevent Ashwani from sending you messages, friend request or from viewing your profile. They will not be notified. Comments on discussion boards from them will be hidden by default.
Sign in to Goodreads to learn more about Ashwani.

Ashwani Pandey is currently reading
The Old Man and the Sea
by Ernest Hemingway
bookshelves: currently-reading

The heated debates between Snowball and Napolean has been depicted from quite early on. Amidst all this, I forgot what Napolean did quite early! As of now, it seems like physical power is all that matters!" — Oct 16, 2016 09:27AM

This book is really awesome in explaining recursion, but somehow lambdas and collections didn't make much sense to me.

And although I somehow completed the chapter, and even started the next one, I didn't feel a good sense of understanding of the matter.

“Cover me!' Augustus said as he jumped out from behind the wall and raced toward the school. Isaac fumbled for his controller and then
started firing while the bullets rained down on Augustus, who was shot once and then twice but still ran, Augustus shouting,'YOU CAN’T KILL MAX MAYHEM!' and with a final flurry of button combinations, he dove onto the grenade, which detonated beneath him. His dismembered body exploded like a geyser and the screen went red. A throaty voice said, 'MISSION FAILURE,' but Augustus seemed to think otherwise as he smiled at his remnants on the screen. He reached into his pocket, pulled out a cigarette, and shoved it between his teeth.
'Saved the kids' he said.
'Temporarily' I pointed out.
'All salvation is temporary' Augustus shot back. 'I bought them a minute. Maybe that’s the minute that buys them an hour, which is the hour that buys them a year. No one’s gonna buy them forever, Hazel Grace, but my life bought them a minute. And that’s not nothing.”
― John Green, The Fault in Our Stars
tags: augustus-waters, funny, tfios
32 likes

“And I think missing you hurts the most when something funny happens. Because in that one moment I find myself laughing, and within the next second I want to tell or text you what happened. And then it hits me again, every single time, that you aren’t there anymore. That I lost that one thing that mattered to me.”
― Elisabeth Van den Abeele
tags: breakup, heartbreak, love, love-quote, missing-someone
87 likes

“Augustus Waters was sitting on the front step as we pulled into the driveway. He was holding a bouquet of bright orange tulips just beginning to bloom.”
― John Green, The Fault in Our Stars
tags: augustus-waters, gus, hazel-grace, hazel-grace-lancaster, john-green, the-fault-in-our-stars
41 likes

"I am," he said. He was staring at me, and I could see the corners of his eyes crinkling. "I’m in love with you, and I’m not in the business of denying myself the simple pleasure of saying true things. I’m in love with you, and I know that love is just a shout into the void, and that oblivion is inevitable, and that we’re all doomed and that there will come a day when all our labor has been returned to dust, and I know the sun will swallow the only earth we’ll ever have, and I am in love with you.”
― John Green, The Fault in Our Stars
tags: augustus-waters, the-fault-in-our-stars
99 likes

True love has nothing to do with the idea that someone is the other half of my soul and that I need him or her in order to be whole and feel complete. Only when we can be alone and all-one with someone there is true love, regardless of whether that someone is still with us or not.

Brian Clegg
author of: A Brief History of Infinity
More…

Polls voted on by Ashwani