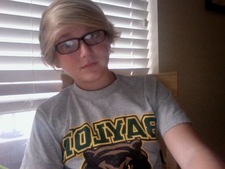 This will prevent Adam from sending you messages, friend request or from viewing your profile. They will not be notified. Comments on discussion boards from them will be hidden by default.
Sign in to Goodreads to learn more about Adam .

“I think I'll just go down and have some pudding and wait for it all to turn up - it always does in the end.”
― J.K. Rowling, Harry Potter and the Order of the Phoenix
tags: luna-lovegood
205 likes

“You - will - never - touch - our - children - again!' screamed Mrs. Weasley.
Bellatrix laughed, the same exhilarated laugh her cousin Sirius had given as he toppled backwards through the veil, and suddenly Harry knew what was going to happen before it did.
Molly's curse soared beneath Bellatrix's outstretched arm and hit her squarely in the chest, directly over her heart.
Bellatrix's gloating smile froze, her eyes seemed to bulge: for the tiniest space of time she knew what had happened, and then she toppled, and the watching crowd roared, and Voldemort screamed.”
― J.K. Rowling, Harry Potter and the Deathly Hallows

“He wanted to go running home to Mommy, what can I say? Of course, it's hard for me to believe that anyone would choose to step out of the FAYZ. I mean, where else do you get to eat rats, use your backyard for a toilet, and live in fear for nineteen different kinds of scary?" -Howard”
― Michael Grant, Lies
tags: the-fayz
73 likes

“Hello' said a vague and dreamy voice from behind them. Harry looked up: Luna Lovegood had drifted over from the Ravenclaw table. Many people were staring at her and few people openly laughing and pointing; she had managed to procure a hat shaped like a life-size lion's head, which was perched precariously on her head.
'I'm supporting Gryffindor' said Luna, pointing unnecessarily at her hat. "Look what it does...'
She reached up and tapped the hat with her wand. It opened its mouth wide and gave an extremely realistic roar that made everyone in the vicinity jump.
'It's good, isn't it?' said Luna happily. 'I wanted to have it chewing up a serpent to represent Slytherin, you know, but there wasn't time. Anyway...good luck, Ronald!”
― J.K. Rowling, Harry Potter and the Order of the Phoenix

M3NT@L (Science Fiction & Fantasy)
14 chapters   —   updated May 13, 2015 06:30PM
Description: After having multiple "visions of the future", Gwyenth Zutter throws herself into a mental hospital. She is interviewed by a mysterious man name Jean Louis Bealmount. Later she asks about him, but there is no record about him working at the ward. Gwenyth is called an easy case and is thrown in with two roomates. But little does she know that Jean was an agent in a secret orginization run by the CIA that tracks down the 13, a group of children with unnatural abilities who are destined to save the world from an unknown threat called The End.

Pittacus Lore
author of: I Am Number Four

Jeanne DuPrau
author of: The City of Ember

Margaret Peterson Haddix
author of: Among the Hidden

Donalyn Miller
author of: The Book Whisperer: Awakening the Inner Reader in Every Child
More…