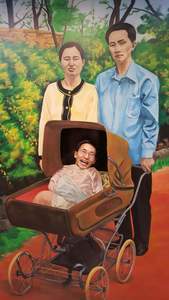 See all 5 books that Chris is reading…

“And yet leaving the room, she did not leave me, for we were mysteriously linked together during the next hours. When Tib left 405 she'd gone outside to walk on the boardwalk. After a while she stepped down onto the sand where she could walk right at the water's edge. She walked for a long, long time. The sun sank lower in the winter sky. Facing south as she was, her eyes began to be bothered by it. Tib has always been extremely light-sensitive, choosing chairs that looked away from windows and so forth. She started to turn around and head north with her back to the sun when a sentence popped into her mind with the force of a command.

"Look neither to the right nor to the left, but only straight ahead."

But straight ahead was the dazzling sun. She walked on a little farther, squinting her eyes. It was getting late. She was a long way from the hotel by now. The meeting in Room 405 must be over, she thought: I would be looking for her. But each time she started to turn around and retrace her steps, the extraordinary words reappeared in her mind.

"Neither right or left. Only straight ahead."

The sun was lower still. Glittering on the waves, glaring straight into her eyes. And still Tib walked on, into the blinding light...”
― John Sherrill, They Speak with Other Tongues: A Skeptic Investigates This Life-Changing Gift

“One of the linguists reported that although he did not identify words, he felt that one prayer had been structured in much the same way a modern poem is structured. "Modern poetry depends upon sound as much as upon verbal meaning to get across its message," he said. "In this one prayer, I felt that although I didn't understand the literal sense of her words, I did catch the emotional content of what she was saying. It was a hymn of love. Beautiful."

It was interesting, too, that although no language known to these men was recorded, they had frequently identified language patterns on the tapes. The "shape" of real language, the variety of sound combinations, infrequency of repetition and so forth, is virtually impossible, so they said, to reproduce by deliberate effort.

Remembering Dina Donohue's parody of tongues-speaking, I had slipped onto the tapes two instances of pure made-up gibberish, one by our son, Scott, and one by Tib. They had tried to sound as much as possible like the tongues on the rest of the tape, but the linguists spotted the deception immediately.

"That's not language," one man said. "That's just noise.”
― John Sherrill, They Speak with Other Tongues: A Skeptic Investigates This Life-Changing Gift

“With no change in the tone of her voice, Lydia began to pray in tongues. And at that instant I felt--actually felt--a wave of warmth pass from her hands into my head and then swiftly down through my chest and arms. The sensation was of heat, but without the effect of heat: I didn't feel flushed or hot. It was like coming close to some immense source of heat, a blast furnace or a sun, that had no burning quality whatever.”
― John Sherrill, They Speak with Other Tongues: A Skeptic Investigates This Life-Changing Gift
tags: prayer, speaking-in-tongues
0 likes

“In Paul's view, there seemed to be three principal ways in which tongues were of value:

1. In private prayer, tongues aided the speaker to praise God.
2. They let the speaker pray even at those times when he or she was not sure what to ask for.
3. And in public worship, when accompanied by another of the nine gifts, "interpretation," tongues provided a vehicle of direct communication between God and His people.”
― John Sherrill, They Speak with Other Tongues: A Skeptic Investigates This Life-Changing Gift
tags: prayer, speaking-in-tongues, worship
0 likes

“At Seabury House, headquarters of the Episcopal church, David was asked the touchiest question of all--the one that in the past had led to more ill-will toward the Pentecostals than any other. He'd been talking to a group of clergymen for thirty minutes or so about the Pentecostal experience when one of the priests stood up suddenly and said with some asperity, "Mr. du Plessis, are you telling us that you Pentecostals have the truth, and we other churches do not?"

David admits he prayed fast. "No," he said. "That is not what I mean." He cast about for a way to express the difference Pentecostals feel exists between their church and others--a feeling so often misunderstood--and suddenly he found himself thinking about an appliance he and his wife had bought when they moved to their Dallas home.

"We both have the truth," he said. "You know, when my wife and I moved to America, we bought a marvelous device called a Deepfreeze, and there we keep some rather fine Texas beef.

"Now, my wife can take one of those steaks out and lay it, frozen solid, on the table. It's steak all right, no question of that. You and I can sit around and analyze it: we can discuss its lineage, its age, what part of the steer it comes from. We can weigh it and list its nutritive values.

"But if my wife puts that steak on the fire, something different begins to happen. My little boy smells it from way out in the yard and comes shouting: 'Gee, Mom, that smells good! I want some!'

"Gentlemen," said David, "that is the difference between our ways of handling the same truth. You have yours on ice; we have ours on fire.”
― John Sherrill, They Speak with Other Tongues: A Skeptic Investigates This Life-Changing Gift
tags: pentecostalism, speaking-in-tongues
0 likes