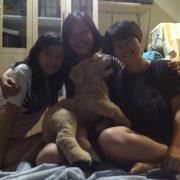 This will prevent Julia from sending you messages, friend request or from viewing your profile. They will not be notified. Comments on discussion boards from them will be hidden by default.
Sign in to Goodreads to learn more about Julia.

Julia Sng is currently reading
Dog Food Logic - Making Smart Decisions For Your Dog In An Age Of Too Many Choices
by Linda P. Case (Goodreads Author)
bookshelves: currently-reading

“Then you begin to give up the very idea of belonging. Suddenly this thing, this belonging,it seems like some long, dirty lie ... and I begin to believe that birthplaces are accidents, that everything is an accident. But if you believe that, where do you go? What do you do? What does anything matter?”
― Zadie Smith
tags: community
40 likes

“She did what girls generally do when they don't feel the part: she dressed it instead.”
― Zadie Smith, On Beauty
tags: dress, fashion, girls
50 likes

“Don't live in a way that makes you feel dead.”
― Zadie Smith
17 likes

“She was a woman still controlled by the traumas of her girlhood. It made more sense to put her three-year-old self in the dock. As Dr Byford explained, she was really the victim of a vicious, peculiarly female psycological disorder: she felt one thing and did another. She was a stranger to herself.

And were they still like that, she wondered - these new girls, this new generation? Did they still feel one thing and do another? Did they still only want to be wanted? Were they still objects of desire instead of - as Howard might put it - desiring subjects? No, she could see no serious change. Still starving themselves, still reading women's magazines that explicitly hate women, still cutting themselves with little knives in places they think can't be seen, still faking their orgasms with men they dislike, still lying to everybody about everything.”
― Zadie Smith, On Beauty
tags: disorder, generation, objects, women
25 likes

“But just because you bury something, that doesn’t mean it stops existing.”
― Jenny Han, We'll Always Have Summer
tags: wise-words
321 likes

Polls voted on by Julia